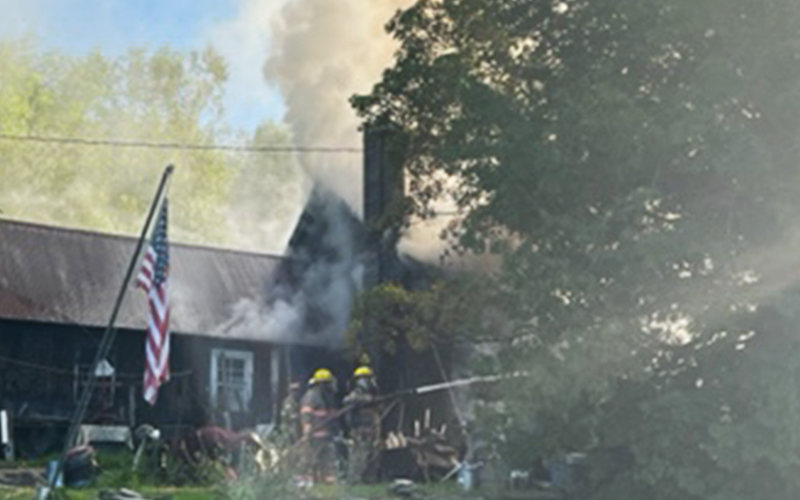 Shortly after 7 a.m. on Thursday, July 28, the Waitsfield-Fayston Fire Department responded to a call for a structure fire at a home on North Fayston Road in Fayston. The home belonged to Gregory Viens, 71.

According to the Vermont State Police’s report, “When fire crews arrived, they discovered heavy fire coming from the southwest corner of the house and smoke coming out of both gables ends. Fire crews from several area departments worked to extinguish the fire but were hampered by the heavy fuel load within the residence that also barred their ability to make entry into the house. As part of fire chief Tripp Johnson’s assessment of the scene he contacted Department of Public Safety Fire and Explosion Investigation Unit and requested assistance in determining the origin and cause of the fire event.

“Members of the Department of Public Safety Fire and Explosion Investigation Unit responded to the fire scene and conducted a scene examination. The examination revealed that the homeowner, Gregory Viens, had started a fire in the woodstove earlier in the morning. A short time later he noticed smoke in the living room and went to check on the woodstove. He saw the items around the woodstove were on fire. Mr. Viens was able to exit the residence safely. The area of origin was determined to be in the southwest corner of the first floor of the house where a woodstove was located. The cause of the fire was due to household combustibles being placed too close to the woodstove while there was an active fire inside.”

Waitsfield-Fayston fire chief Tripp Johnson said that fighting the fire was challenging due to the heat and humidity of the day. “It required a lot of manpower,” he said, noting that he called in mutual aid from other area fire departments, including Moretown, Warren, Berlin and Stowe. Local volunteers also assisted.

“Thank you to the first responders, business owners and community members” who helped combat the fire, including supplying water and food. “It really helped our efforts,” Johnson said. He also said that they utilized the stand pipe at the Fayston town garage, which “helped the fighting dramatically.”