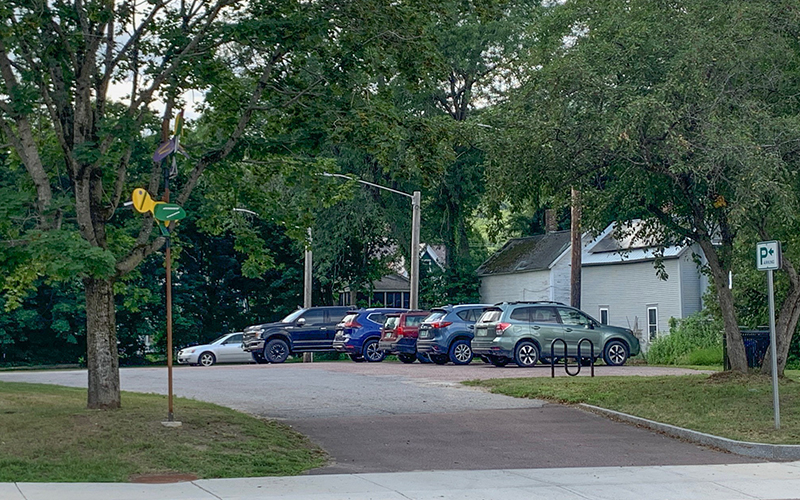 More than 50 local residents turned out last week to hear about a proposal to build about two dozen apartments in a three-story building on the site of the former town office on South Main Street.

The meeting at the Main Street fire station focused on details of a potential new project with a substantial discussion of the tight housing market and the impacts that has on the community.

The nonprofit Downstreet Housing and Community Development is interested in building on the 0.8-acre parcel that currently serves as a municipal parking lot.

Downstreet already operates three apartment complexes in Waterbury: the Green Mountain Seminary apartments on Hollow Road in Waterbury Center, the Stimson and Graves building on Stowe Street, and the South Main Apartments at the former Ladd Hall site at the edge of the State Office Complex. It sees the centrally located lot at 51 S. Main Street as an opportunity for studio, one- and two-bedroom units.

The meeting was organized by the board of commissioners of the Edward Farrar Utility District which inherited the lot from the former village municipality when the village government was dissolved and the utility district was created in 2018.

The commissioners are considering whether to sell the property to Downstreet, a move that they could approve simply as a board but one they say they will take to the utility district’s roughly 1,500 voters for a final say as soon as next month.

The property was cleared in 2019 when the building on it was torn down. Tropical Storm Irene in 2011 damaged the building and caused a fuel spill in the basement and village officials decided that the estimated $435,000 cost to restore the structure was too high.

Utility district board chair Skip Flanders gave a history of the property dating back to the 1800s. The house on the site was a private home last owned by local radio announcer Rusty Parker. After his death in 1982, the village purchased the property for about $74,000, Flanders said, and renovated it to be used for municipal offices and the police department until Irene happened in 2011.

Flanders said that the insurance settlement for 51 S. Main after the flood came to just under $350,000. It spent $74,000 to deconstruct and tear down the building. The settlement funds have since been invested and have grown, according to Municipal Manager Bill Shepeluk.

In the past decade, several development proposals have been floated for the site, but none won favor with the district’s officials or voters. Today the vacant property is appraised at $135,000, the price the utility district would ask Downstreet to pay if it moves ahead with a sale. Flanders said utility commissioners last fall asked Shepeluk to contact Downstreet to explore the potential for housing on the site. “The commissioners thought we should find a use that meets one of the highest priority needs in Waterbury,” Flanders told those assembled at Wednesday’s meeting.

Several presentations addressed the need for housing in the community and the suitability of 51 S. Main Street for residential development. Select Board member Alyssa Johnson, who previously served on the planning commission as chair, highlighted pertinent sections in the Town Plan which was adopted in 2018.

In various spots, the plan emphasizes the priority to maintain open countryside areas while concentrating new development in areas already developed, she said. A goal for growth is to focus on the downtown district where water and sewer service is located, she pointed out.

Assistant planning and zoning administrator Neal Leitner discussed the current permitting review process. Interim zoning regulations were adopted last year and they would allow for multi-family dwellings in the downtown district, he said. A project would receive design and site plan review by the development review board, which would be public processes.

Mark Polilio Jr., economic development director at Revitalizing Waterbury, shared findings from economic and housing studies done in Waterbury in 2021. Detailed summaries of those are online on the Revitalizing Waterbury website. Two key points were that between 2019 and 2021 housing sale prices increased by about 30% or $98,000 in Waterbury; and that the downtown district had no housing vacancies, Pomilio said.

A survey of 115 respondents found a desire for more year-round housing in the form of studio, one-, and two-bedroom units to meet current and future needs, he noted.

Former select board chair Mark Frier, an owner of The Reservoir restaurant who also works as a realtor, addressed the group and discussed how a tight housing market makes it difficult for employees to find places to live close to where they work, making it difficult for businesses to find employees.

The COVID-19 pandemic in particular increased the demand from new residents leaving cities and coming to Vermont, Frier said. Meanwhile, some apartments are being converted to short-term rentals making them unavailable for local tenants. “Landlords have full control,” Frier said. “It’s good for those who own, but a real problem for those who rent.”

The conversation then focused on how having so few vacant units leaves little flexibility for people to move in or move around. Frier said a 3% vacancy rate would be considered healthy and that would translate to 100-200 new units in Waterbury. But when about 60 units were built on Blush Hill recently, they filled up quickly. “We’re not meeting the demands of the area,” Frier concluded.

Shepeluk noted there are older residents looking to downsize from larger single-family homes to smaller units who can’t find options, either. Shepeluk pointed out that adding new units into the mix could free up other homes as people move.

In introducing the development proposal, Downstreet’s director of real estate development Nicola Anderson noted that the project manager Kaziah Haviland is planning to move to Waterbury and was unable to attend on Wednesday.

Anderson said Downstreet currently serves 62 adults and 29 children in its 60 housing units in its three Waterbury properties which have just three vacancies, she said.

Anderson noted that the nonprofit organization Evernorth, which assists with financing affordable housing, is a partner in the project and would be a co-owner.

As Downstreet continues to develop projects around the state, representatives have been looking for more potential sites in Waterbury for the past several years, Anderson said, pointing out that its last project here at South Main Apartments was done in 2015.

Initially, designers considered a four-story building for 51 S. Main, she said. “But that would tower over other buildings.” Currently the preliminary design shows 26-30 mostly one-, two-bedroom and some efficiency units with some community space in a three-story building. It would have a front porch along the Main Street side and parking with a landscape buffer in the rear.

Project planners are asking the community for their ideas and feedback, she stressed. “We want to be good neighbors and be thoughtful on design.”

The timeline now relies on an opportunity to apply for project funding in the late fall, Anderson said, which would mean having a purchase option soon to move forward. Construction could come in 2023.

Although income qualifications vary, Anderson offered a benchmark for tenants being a family of two with income of $60,000 or less.

Meeting attendees offered many comments and asked questions about the plans such as whether the building meets zoning requirements, how it would accommodate utility infrastructure on the site, and whether it could include commercial space on the ground floor.

One question raised the possibility of Downstreet locating a project on the now vacant part of the State Office Complex along Park Row where the Stanley and Wasson Hall buildings were demolished in 2021. Anderson noted that the site is a possibility, but it would require a longer process to acquire and develop, taking until about 2026 before it could be ready for tenants.

One significant design suggestion raised: including retail space on the ground level. “This is the last prime location for retail in our town. Why are we not considering at least putting two retail places like in the Stimson and Graves building?” asked former retailer Darrick Pitstick.

Anderson said that commercial and retail spaces are currently difficult to rent throughout Washington County, but Downstreet plans further study on that. Adding commercial space to the design would also reduce the residential units, making it more difficult for the project to be viable.

Another attendee suggested that the prospect of adding more housing in a few years near the state offices could justify including some ground-floor commercial space at 51 S. Main. Anderson didn’t completely reject that suggestion. “It's something we will look at, but we are a housing organization. We’re not out there trying to recruit commercial tenants or employers,” she said, pointing out that the priority is to address the need for housing for those who work in existing businesses in town.

Other questions were asked about how Downstreet screens applicants, whether the site will have any room for green space (answer: maybe), and if new construction would incorporate renewable energy. The project would rely on electric heat pumps for heating and cooling and solar could be part of the design, too, Anderson said.

Yes, said Shepeluk, who was ready with figures of what Downstreet’s current properties pay in municipal and school taxes this year: just over $26,000 at South Main Apartments; Stimson and Graves and the Green Mountain Seminary buildings pay just under $12,500 each. Shepeluk added that the town’s wastewater system also has ample capacity to accommodate new residential development such as the proposed project.

Acknowledging the early stage of the proposal, attendee and Planning Commission member Dana Allen said he was pleased with what he saw. “I think we need this very badly. I hope this goes forward in some form,” he said.

Shepeluk explained that the utility district’s charter requires a public question such as this property sale to happen at a special in-person meeting for voters in the district. It would not be an all-day vote by paper ballot, he said. Those residents who live in the area formerly known as the village municipality are eligible. The district’s elections typically draw very low turnout. This year’s annual election in May, for example, had fewer than 50 voters participate. Anyone unsure of whether they are eligible to participate may contact the town clerk.

The EFUD board meets on Wednesday, September 14, at 4:30 p.m. in the Steele Community Room at the municipal offices. The Downstreet proposal will be on the agenda for discussion, Flanders said. If the board takes action to move ahead with the sale, a district meeting could be scheduled as soon as October given the requirement to warn it at least 30 days in advance.