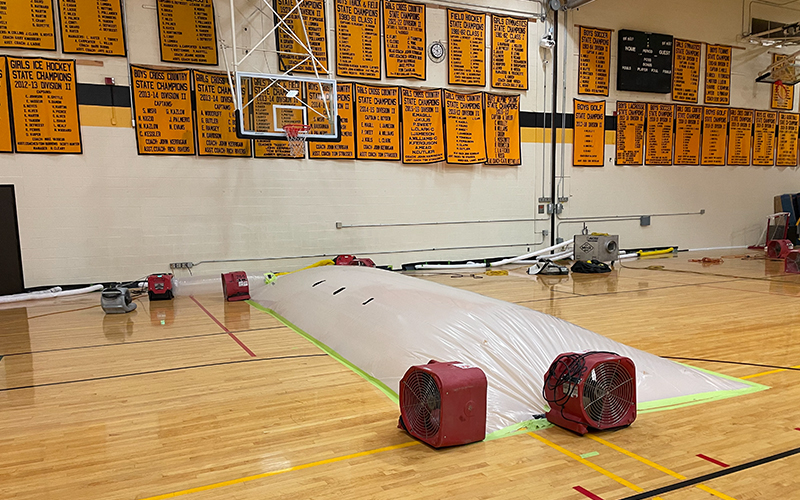 Clean-up efforts are underway at Harwood Union after a broken fire sprinkler flooded a portion of the school’s gym on September 22.

A teenager tossing a ball in the Harwood Union gymnasium around 11:15 a.m. somehow managed to throw a ball at the ceiling in such a way that it ricocheted which then hit and bent a sprinkler head causing it to malfunction, explained high school co-principal Laurie Greenberg.

When the sprinkler went off, the fire alarm did as well and the school was evacuated on a day when it was raining heavily throughout the school district.

Ray Daigle, director of facilities for the Harwood Unified Union School District, said that in excess of 1,000 gallons was dumped onto the gymnasium floor. Daigle explained that the sprinkler system is considered a ‘wet’ system which is fully charged at all times and fed from a fire pond up behind the school.

Daigle, Greenberg, district superintendent Dr. Mike Leichliter, The Valley Reporter and The Waterbury Roundabout discussed the incident during a Zoom call on September 27.

“When a sprinkler head gets knocked off or activated, the pump turns on and starts pushing out water,” Daigle said.

And the water that is in the sprinkler system is “very nasty” Daigle said. In the pictures that surfaced shortly after the flooding last Thursday, the water was discolored and dark.

“It’s not nice water. It’s in iron pipes and cutting oil was used when they were put together. It’s rust and grease and whatever is in the pipes,” he said.

Daigle and his crew used shop vacs to remove standing water and got G.W. Savage to the school that afternoon to begin the clean up and work on drying things out.

The gym floor is installed on an underlayment that sits on the slab.

“We’ve got a big sponge here. It’s very difficult to get air underneath to dry it out. They’re trying to see if we can get the moisture percentage down,” Daigle said, noting that in the worst areas the moisture level is in excess of 20%.

“In talking to our floor expert, it should be down around 8%,” he explained.

Daigle said that an estimated 20% of the floor was flooded but noted that it is not yet known how far the water migrated through the substrate.

G.W. Savage and the flooring consultant told Daigle to wait a week and see how and if the moisture drops before planning next steps. One such next step might be to take up the wooden floor, remove the wet underlayment, dry everything out and install a new subfloor.

Daigle said that G.W. Savage is currently pumping heat under the floor and has tented an area considered to have suffered the worst flooding to keep heat in and drying out faster.

“What’s more concerning is the uneven surface. You’ve got buckling. Even if we were to say the floor is dry, we’re still going to need to go in and refinish the floor,” he said.

For the time being, the gym is closed for two weeks.

“We’ve got it closed for two weeks and are re-assessing as we go. This first week it’s closed to reduce the moisture and the second week will be if we need to refinish the floor. Right now, it’s still fall sports season and only volleyball needs the gym right now,” Greenberg explained.

Volleyball teams are being bussed to Crossett Brook for practice and games right now and were bussed there the day of the flood, she said.

As for gym classes, those are being held outside for the time being, something school administrators and staff mastered during COVID.

“PE classes are outside. One skill we learned from COVI8D was how to have PE outside for over a year,” Greenberg said.

Greenberg said the cost of the incident would be covered by insurance, but given the uncertainty over the extent of the damage to the floor, the cost was currently unknown.