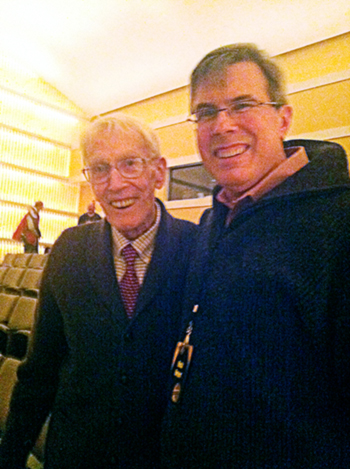 Growing up, Waitsfield resident Patricia Amann knew her father, Tom Roche, had fought in World War II, "but we never knew what he did," she said. "We never talked about it as a family." Then one Thanksgiving in the mid-1990s, Roche started swapping war stories with his brother-in-law, and a previously top-secret part of U.S. military history began to take shape.

During World War II, Roche belonged to the 23rd Headquarters Special Troops, now nicknamed the "Ghost Army." The Ghost Army consisted of 1,100 soldiers tasked not with invasion but with creating diversions to distract the Germans from an actual invasion.

"They had these giant boom boxes...fake blow-up tanks, fake planes, fake artillery," Amann said, giving some sense of the technologies the troop used to create the illusion of war, saving the lives of U.S. soldiers that remained undetected not too far away.

Roche, now 89 years old, was in college at the time and he belonged to the sonic unit. There were three other units: the camouflage unit, the engineer company and the signal company. Each unit created a different facet of the "fake war scenario," he said.

The troop followed the direction of Colonel Hilton Railley, "who was primarily responsible for this concept of deception in the U.S. Army." His sonic unit, Roche said, played wire recordings that sounded like hundreds of soldiers moving through an area. "We worked only at night," he said.

When not working with sound, Roche would ride into town in a canvas-covered army truck with two armed soldiers guarding the rear, to imply that it was full of infantry. "But the truck was empty," Roche said. Other times, they would go into bars and pretend to accidentally let slip the secrets of their "invasion." "We would talk to each other so [that] other guys would hear," Roche said.

During World War II, the Ghost Army carried out 21 successful diversions, saving an estimated 15,000 to 30,000 lives. After the war, the troop was sworn to secrecy for 50 years. "We were told, 'just forget about it,'" Roche said.

"The U.S. military didn't want other countries to know," Amann said, explaining that the Ghost Army's deception methods were "pretty sophisticated." It wasn't until 1996 that the troop's mission became public and still many won't learn about it until this spring, with the premiere of Beyer's documentary.

"It's a good story," Roche said, explaining that the Ghost Army was driven by creativity as well as technology, and it was a diverse group. "Blass would be reading Vanity Fair while all the other guys were reading Playboy," he said, laughing.