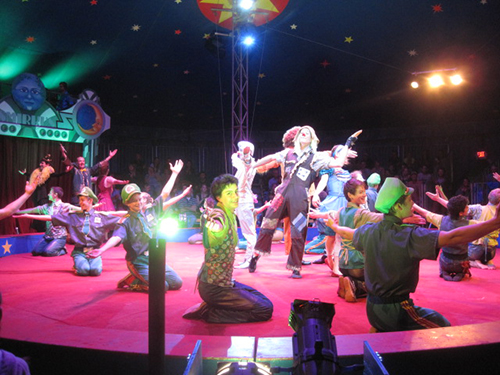 Driving down tree-lined dirt roads in the Northeast Kingdom, I had to keep checking my directions to make sure I wasn't lost. Is this really the way to the circus?

On Saturday, June 28, Vermont's very own Circus Smirkus kicked off its 2013 Big Top Tour, Oz, Incorporated, at its base in rural Greensboro, where troupers rehearse for only three weeks before taking their show on the road. This year's troupe, which is made up of youth ages 10 to 18 from across the country and world, features six troupers from Vermont, including Brin Schoellkopf, 16, of Warren.

This year was Schoellkopf's third year as a trouper—or "Smirko"—and "there's definitely a different level of maturity I have to have," he said, explaining that it's important for him to be a role model for first-year troupers. "I remember when I was a first-year trouper and was so confused by everything that was going on," he said.

Even though he's a now full-fledged Smirko, Schoellkopf still spends his free time working on new tricks. "I have a tightwire at my house [that] I train on all the time," he said, in addition to stretching and staying in shape throughout the school year so that he can be ready for the summer.

While Schoellkopf does not perform on the tightwire in this year's tour, "I've found myself very connected to [it]," he said. "It brings me to a place where I can be alone and focus better," he explains, and right now he's working on a backflip on the wire.

But right now, Schoellkopf is focused on the tour, and while it's his third year performing in Circus Smirkus, last Saturday was my first show.

Last Saturday, I watched in awe as performers balanced atop poles, contorted their bodies, tumbled from the ceiling on ropes and did many more things that I don't know the name of and couldn't even begin to describe. Like many circuses, Oz, Incorporated contained almost no dialogue and instead relied on sound effects, setting the stage for tongue-in-cheek humor followed by shows of strength, agility and artistry.

"This was probably the best opening show I've been in, because of how smoothly [it] flowed," Schoellkopf said after Saturday. "We can only grow from here."