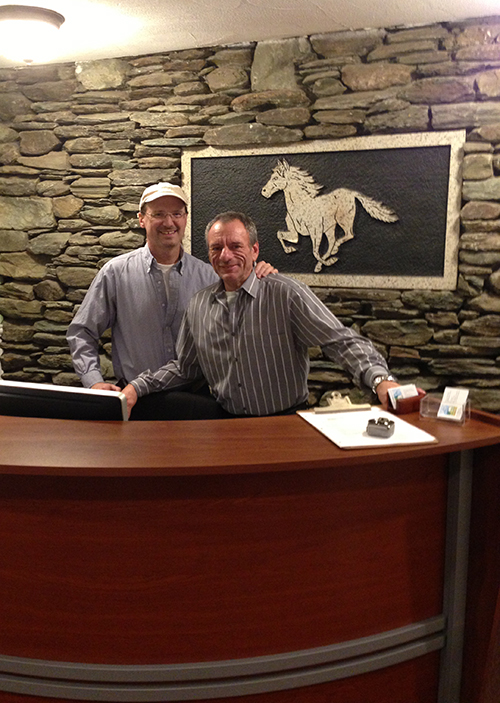 Standing amid a tumultuous ocean of stacked boxes and tables stacked with boxes, dishes and more, the new owners of White Horse Inn on German Flats Road in Fayston, are remarkably calm about the herculean amount of work that lies between them and opening the inn for the season.

Allen Zeiner and Bob Heffernan bought the inn this fall, closing on it on October 9 and then getting straight to work on some cosmetic renovations, some electrical renovations, some actual construction, some aesthetic upgrades and some serious organizational work.

The day I visited, Zeiner came from one direction to visit me and Heffernan's mother Roberta Heffernan came from the first floor while Heffernan showed up from some point unknown in the rambling 26-room inn. (The new owners found a new guest room they hadn't known about just last week as they began putting the rooms back together in preparation for the season.)

When they purchased the inn, it had a new boiler and they thought the property had the appropriate state and local permits. They discovered that some of their windows needed to be replaced to meet state fire codes along with some wiring. So they took those rooms apart while the windows and trim were replaced, while simultaneously re-sheetrocking the housekeeping closets on all three floors of the inn.

In the kitchen and dining rooms, the kitchen is awaiting a new exhaust hood and some rearrangement, while the dining room is the current storage place for unpacked boxes and items displaced from the rest of the inn during remodeling. The neatest place on that floor is the pantry where Zeiner – a trained pastry chef – had meticulously unpacked and laid out row after row of gleaming bowls, pans, baking sheets and more.

"We're going to bring back the White Horse and focus not only on the vital ski season but also go after the year-round business with small groups, retreats, corporate meetings, and the like," said Heffernan, the managing partner.

The inn can sleep between 50 and 68 people with room sharing. It includes a 44-seat dining room and great room with a soaring stone fireplace.

The lobby/registration area has been upgraded and made sophisticated by a sleek new desk. In the corner an antique white carousel horse welcomes people and across from the desk are framed photos of Heffernan and Zeiner wearing dead-giveaway 1980s skis and ski jackets on the top of a mountain that looks like Mount Ellen – but isn't. Visitors are invited to guess.

They were happy to provide a tour of the inn and started with the larger rooms on the third floor where king-size beds abound. The second/middle floor of the inn features mostly queen-size beds with an interesting suite featuring a double bunk bed. That floor also has a few beds with single rooms, as does the first floor. On the first floor there's a large kitchen/dining room plus a game room that could be used for corporate retreats and other small group functions.

Heffernan and Zeiner want to get a feel for how much work it takes to run the place and the volume of business they need to bring through before they expand into other types of work. They did say they might consider opening to the public for breakfast because of how hard they are getting lobbied to do just that. That will also have to wait at least until they get a sense of what running the inn is going to be like.

While they unpack boxes and work, Zeiner is plotting his full breakfasts, the pastries and what he hopes will become a signature egg dish. He will serve fruit/yogurt, granola, muffins, croissants and other pastries every morning. He'll also offer a sweet dish like pancakes or waffles and a savory egg dish.

Although they've been together for 22 years, this will be the first time they've worked together as partners in a business venture. They are both avid skiers who'd been making regular pilgrimages to Mount Ellen each season.

Last year in February, while driving down Mount Ellen Road, they looked across German Flats and saw the For Sale sign at White Horse Inn, looked at each other and said "Hmmm."

By then it was too late. They were hooked on the idea and hooked on the property and the deal was made and here they are working like yeomen with the help of friends and family. Heffernan has siblings nearby whose skills and strength he has called upon since closing.

Heffernan, 57, is three and a half years away from a seven-year battle with melanoma and is happy to be here working as a handyman, business planner, inn owner, host and soon to be Mad River Glen skier. His past experiences have taken him from high levels of government in Washington, DC, to co-owning a business for 19 years, then directing three state associations (all in Connecticut), and finally beating Stage IV cancer the past seven years. Many years of his life were spent with his godmother's family as they operated the renowned Red Inn in Provincetown on Cape Cod in the 1970s to early 1990s.

"I know how hard you have to work to run a successful inn," he said.

An author with a degree in journalism, Heffernan has written two books: Cabinetmakers telling the story of his Washington days, and this year he released Cancer's Gifts With Love & Hope about his battle with Stage IV melanoma.

Zeiner comes to White Horse Inn with a culinary arts degree from Johnson & Wales University and over 16 years experience as a pastry chef working for several bakeries in his native Connecticut.

Pending approval of necessary state licenses, they hope to re-open White Horse Inn around the first week of December. Their families—who have worked alongside them to ready the inn—will all stay there for the Thanksgiving holiday to test everything out.

"We are blown away at the welcome here in the Mad River Valley," Heffernan said. "Everywhere we go, people stop us, introduce themselves and say they are rooting for us."

He and Zeiner, 51, are excited to be part of the community and have promised to buy shares at Mad River Glen and engage fully. The first check of their new White Horse Inn checkbook, #101, went to join the Mad River Valley Chamber of Commerce.