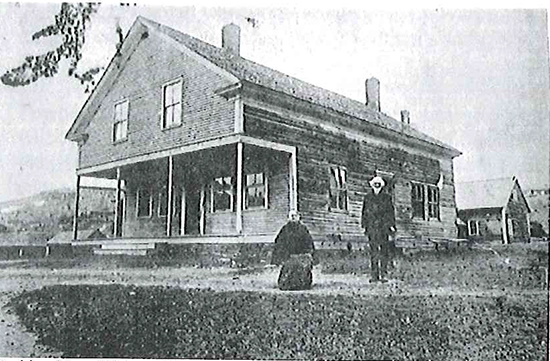 Last week the Warren Select Board discussed its plan to put demolition of the Ruby Blair house out to bid this spring so that by fall the town will have a new swath of green space. But how is it that the decision was made to demolish the house, the original portion of which was built in 1900?

Warren purchased the property in 1995 from the late Ruby Blair as part of its facility planning for the municipal complex. Blair had a life estate on the property. The Blair house sits between the town offices and the town hall, accessed by the same driveway that leads to Warren United Church and town buildings.

"Over the last six years the building has required some ongoing maintenance and continues to require more taxpayer money to fix it up. It sits on a stone foundation with a dirt floor and no insulation. The house has a big heat loss. Last year the select board decided that it did not want to continue to be landlords and it would be more cost efficient for taxpayers to demolish the building. The board decided it was in the best interest of the town to demo the building instead of keep putting money into it. So, the Department of Public Works moved into the municipal building and the two tenants vacated the property. They decided to move forward with demolition of the property as part of the planning charette. So, this summer it will be torn down," explained town administrator Cindi Hartshorn Jones.

Warren's zoning administrator Miron Malboeuf provided some historical context on the design and planning charette that Jones referred to. That charette took place in October 2006.

"At that daylong charette, the town laid out its plans for municipal facilities, and the Blair house was part of that exercise. There was a lot of deliberation, 30 to 40 people participated. The consensus was that the Blair house, although partially historic, it was not historic enough to return it to the Cardell House, which was built at the turn of the century. There was agreement to preserve the barn. At the time, the plan was for the library to move to the town hall, but planners also felt that the library may need another building which would be built between the municipal building and the town hall," Malboeuf explained.

Malboeuf said that the building had been rehabbed several times between its original date of construction, having had a wing added on and then been cut into apartments. He said that while the plumbing had been upgraded to copper piping and the asbestos had been removed, it still contained building materials from the 1940s that people would not use today. He said the town would have spent between $400,000 to $500,000 to restore the original portion of the building.

"One of the most salient points that came from charette came from an architect who said, 'Some things are historic and some things are simply old.' There were people there arguing that we should preserve it. But the town has to weigh a variety of budgeting priorities. We've got a town garage we need; we have an extensive road system to maintain. If a benefactor came along and said they'd take the building for its historic value, the town would have given it up. But that didn't happen. Everyone wants to preserve what they think is historic, but the reality is that funding those types of projects is very arduous and while there are grants available, the grant process is similarly tedious," he added.

Warren Select Board member Anson Montgomery and Malboeuf explained that the Blair house is currently hooked up to the town's municipal wastewater system and that that capacity would be retained. The property also has its own well, the fate of which has not yet been determined. The water source for the other adjacent town properties is a well that fills a cistern at the Warren Fire Department. That serves the fire station, the town offices and the town hall. The water going into the cistern does not meet the standards for public drinking water and bottled water is provided at those properties.

Jones provides further information about the origins of the Blair house that came from Warren Public Library. This information is also found in the town's Evaluation of Public Historic Resources.

The book mentions the Blair house and the barn as being circa 1900. "This gabled frame barn has a shed-roofed addition on one gable end. Clapboarded, it has a narrow raking cornice that projects over a narrow frieze and corner boards. It has a gable front and eaves side entries with double and sliding doors."

The Warren Historical Society is currently in the process of rehabilitating and preserving the barn. In 1992, the property was nominated to the National Register of Historic Places (although apparently not named to the register). That nomination provides further history of the building and its owners. An 1858 map showed the property as the home of Edwin Cardell, one of William Cardell's sons. William Cardell was born in Southwick, Massachusetts, in 1788 and came to Warren in 1817. He sold his land and went into the mercantile business, where, according to the nomination, he lost almost everything he had.

"His next business venture was to construct a turnpike up Lincoln Mountain in 1825. He kept a tavern and toll-gate service on the turnpike for several years and then moved into the village where he died in 1870. His son Edward [Edwin] was born in Warren in 1834. In 1858, he bought a sawmill in the village and was engaged in the lumber business until his retirement in 1886," the nomination reads.