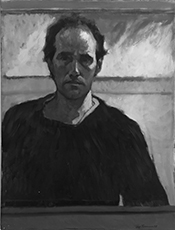 Brauer, a world-renowned artist, drew his first self-portrait at the age of 9 and was lucky enough to get to live his passion for art. He was born to Herman and Tess (nee Horowitz) Brauer on June 16, 1938, and grew up in Forest Hills, Queens, NY.

From a very early age Billy had an interest in art. His mother took away his first oil paints given to him by an aunt because they were too messy, and he was unable to attend art school because his family wanted him to get a real job. He ended up at the University of Miami on a partial golf scholarship – as his father taught him to golf as a young boy – and he became an accomplished golfer.

After several years at college he returned to New York and, with no family encouragement, went to The School of Visual Arts in Manhattan. He was a protege of surrealist Frederico Castellon, whose influence can be seen in Brauer’s early etchings. He subsequently worked as an illustrator and in advertising in NYC.

In 1962, he married Penny Galowitz and their son, Lee, was born later that year.

Brauer moved to Vermont as part of the back-to-the- land movement in the early 1970s where he homesteaded and began what would be his life’s passion of painting in oil. Over the next two decades Brauer achieved significant success with his work.

Brauer’s first major exhibition, in 1974, was the Associated American Artists’ New Talent in Printmaking show. His work was selected for the permanent collection of the Brooklyn Museum and was featured in their 19th annual Print Exhibition. He won the Anonymous Prize in Printmaking from the National Academy of Design and was commissioned to do special editions for the Associated American Artist in 1974 and again in 1977. Brauer received an individual grant from the Vermont Arts Council in 1976. It was shortly thereafter that he switched his focus from printmaking to painting and he primarily worked with a brush after that.

With the change to oil painting, Brauer’s work became more sought after and appeared in galleries from Boston to Seattle and in private collections around the globe. Working from a turn-of-the-century barn that he rehabbed with his then wife, Warren artist Marilyn Ruseckas, his style went through many changes over the years but always focused on human forms and light, often with mythological and literary themes.

Brauer loved helping others become better artists and taught classes at the University of Vermont, Goddard College and Vermont College and has inspired many students in a private life drawing class that was ongoing for over 40 years.

He is survived by his wife, Wendy; his son, Lee; his adored stepchildren, Lauren Appleby (Crawford) and Charlie Tompkin; two grandchildren, Jesse Brauer and William Appleby; beloved cousins; as well as a devoted cadre of friends and students.

In lieu of flowers, the family requests that donations be made to Central Vermont Home Health and Hospice (www.cvhhh.org) and Valley Arts (www.valleyartsvt.com). A celebration of his life will be held at a later date.