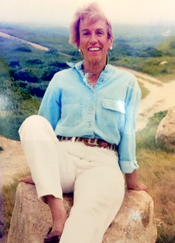 Constance Cunningham van Heuven of Moretown was born Connie Hay in Montclair, NJ, to Barbara Booth and William Thayer Hay. Connie lived with her grandmother, Mary Verner, after the early passing of her parents when she was a young teen. Athletic, graceful, kind and fun, she attended Montclair Kimberly Academy, Colby College and NYU, where she earned her BA in education.

After working for the Today Show in New York where she happened to be with Hugh Downs when Kennedy was shot, she moved to San Francisco to work for AT&T, stopping in Aspen and waiting tables for the ski-season at mid-mountain and the Crystal Palace, when Aspen had only a single chair.

She then taught students in New York and Boston before moving to The Valley to educate the third and fourth grades at Fayston School. She met Wick van Heuven at a post-ski party in Waitsfield. He had purchased Elmer Lee’s farm on Waitsfield Common. They married in 1967, settled in Albany, coming to the old farm to ski and summer for decades.

In the early 1980s, the family, now with sons Jay and David, moved to San Antonio, where Wick was chair of ophthalmology at the University of Texas. After 20 years, they again began to spend more time in The Valley and Connie pursued painting and volunteered for hospice.

Her love for Nantucket and The Valley informed her painting of the majestic light of sea and landscapes. Connie was a loving, wonderful and artistic mother with a warm wit, a friend to many Valley people and is survived by her husband Wick, her sons Jay and David and her brother Peter. A party will be held in celebration of her life.