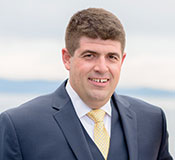 Ryan C. Yacavoni, 38, of Richmond, Vermont, passed away unexpectedly on July 21, 2021. He was kind, charismatic and loyal, sometimes to a fault. Ryan grew up in Waterbury Center and attended Harwood Union High School, where he found his lifelong friends. He attained a degree in accounting from Southern New Hampshire University in 2004 before joining the workforce. Ryan, like his father, loved to work. He briefly resided in New Hampshire before moving to San Francisco, a city he fell in love with.

His work took him to Philadelphia and then to Boston, where he could enjoy many of his favorite things: the Red Sox, Patriots and Boston Bruins. Ryan also loved to snowboard and was a car enthusiast, slowly building his collection after time. Ryan returned to Vermont in 2015, later settling in Richmond and marrying his wife, Catherine McKelvey, in 2017. He cherished being in the place that was always home with the people that he loved the most.

Far greater than his passion for Boston sports and German sports cars was the devotion Ryan had for his family and friends. Ryan entered every room with his wide smile, infectious laugh and arms wide open to hug the people he loved. Always up for any adventure, he turned the simplest activity and the most average of nights into long-lasting memories. His generosity, energy and laughter left an eternal impression on those who had the good fortune to know him, and his spirit will go on in the many memories he cultivated. He will be deeply missed.

Ryan was predeceased by his father, Michael Yacavoni, and is survived by his wife, Catherine McKelvey of Richmond; his mother Mary Lynn Percy of Waitsfield; his sister Jennifer and her husband Rob Schonder and their children, Addison and Emma of Waitsfield; his grandmother, Patricia Percy of Montpelier; his uncle Bill and his wife Brenda Yacavoni and their children of Barre; along with many aunts, uncles and cousins who he loved dearly.

Services: Calling hours were held on Sunday, August 1, at Perkins Parker Funeral Home in Waterbury. A Mass of Christian Burial followed at St. Andrew’s Church in Waterbury. A celebration of Ryan’s life was held on Monday, August 2, at Sugarbush Resort at Lincoln Peak in Warren.

In lieu of flowers, donations may be made in Ryan’s memory to the Janie Chase Cozzi Foundation (www.playforjanie.com).