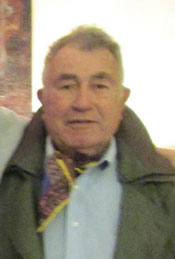 John Macone grew up in Concord, MA. His dad sold Plymouths and his mom could make about anything with needles and thread and paint brushes. I grew up in Concord with my four sisters. I was the oldest and my sister, Margot, only 15 months younger. I married Frank Day in 1950 and Margot soon followed marrying John Macone.

We both had kids about the same age.

John was in the service moving to Illinois and then San Francisco where they lived on a houseboat while John was part of the management for the Olympics. They moved to Mt. Hood, Oregon, where John was in charge of revitalizing the resort area on Mount Hood.

John and Margot always loved dogs. While living on Mount Hood they had a husky sled dog team along with their son, Peter, who thought he was a husky, too. Their second son was born in Illinois and in the mid 1950s they moved to Bragg Hill in Fayston in the Mad River Valley. Frank and I had Knoll Farm just below John and Margot’s rented house. John worked for Andy and Sonny Hengsteller

In 1960s The Hengstellers were the contractors for Alpen Inn (where Yestermorrow is now). To get more businessm John cleared the field in front of Alpen Inn, put a lot of masking tape on some ski poles, put up some goal posts, gathered a few half-deflated soccer balls and polo in The Valley was born -- all timed to coincide with cocktail hour at the Alpen.

John wasn’t a horseback rider, but soon became one as did quite a few Valley residents. Margot was already an excellent rider and a woman’s polo team emerged. John was an ingenious person always inventing, building, planning. He was an excellent, if not daring, airplane pilot. (Think landing a flimsy plane on a very bumpy half airport in Puerto Rico.)

He and Margot and my dad, Alan Bemis, along with Warren Ketcham, Jack Murphy and Jim Herman and others, started soaring, first at Este’s Airport where the gliders were towed up by a car!

Sometime in the 1960s, the same group plus Steve Flemer moved the glider business to the much-improved Warren Airport where gliders were towed by plane to several thousand feet. A glider could remain soaring for hours if conditions were right, sometimes landing in a farmer’s hayfield in East Montpelier or Williamstown. A restaurant was built at the airport that included a soaring club headquarters and Mae Ketcham serving yummy homemade food.

For several years in the 1970s, John was constructing the wing of a plane in the basement of Alpen Inn. After it was built, a problem came up -- how to get the wing or maybe the whole plane out of the building? Meanwhile, John and Margot would tend to the guests at Alpen, then off he would go into the cellar to work on the plane until 3 or 4 a.m. It was a mystery when he slept as he was always the first one up.

A pool was built on the north end of Alpen Inn and covered with some kind of plastic. It wasn’t heated or if it was it was set just above 32 degrees. There were lights over the pool but to get to the pool, we had to run from a warm room, down the hall and out into the pool. John started a pool club hoping the income would pay for the pool. It lasted one season.

John Macone always seemed to be everywhere around The Valley. He was smart and knew how things worked. He was a bit crazy and unpredictable but was fun and accomplished good things for many people in The Valley.