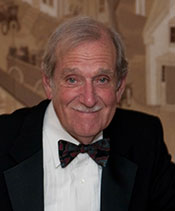 Goodbye friend. Last week we lost David Steinman. Our sympathies to Arlene and his family.

I think we met in 1978 when he and Beth came to Jennings Real Estate looking for a business. Beth was in her tennis dress and David looking sporty. He continued the “sporty thing” through life starting with Gallagher’s (more bar than restaurant) where the locals and skiers mixed mostly happily while drinking and dancing to some very loud and wonderful bands. I will miss the stories that were embellished to perfection over the years.

David later jumped right into the Mad River Cricket Club (yes, only one person knew how to play -- James Plumpton). Another reason to be sporty --  there were blazers with an emblem and a reason to party. And more stories.

There were tales of a scavenger hunt where the winner found Hap Gaylord (on the scavenger list) and brought him to the party.

David’s sideline was restoring antique vehicles for himself and others. To say that he was a perfectionist is an understatement. It started when he got his first car as a teenager. He was hooked. His restorations won awards all over the country. In fact, we helped load several bodies onto frames over the years. Things that looked like rust buckets later turned into swans. Perfection, over and over.

Years after Beth died, David found Arlene -- his constant, good-humored partner who loves parties, likes to laugh and dress up and miraculously could avoid rolling her eyes as the stories “got better.” She was the perfect foil for David’s evolving gift for storytelling. Arlene saw David through good times and some serious tough going. I will always admire her for that. Throughout his health challenges, David still made an effort to see his friends never complaining… except about getting old (which we all do). Sadly, the voice of the raconteur extraordinaire is stilled and we will miss him. Long live the stories.