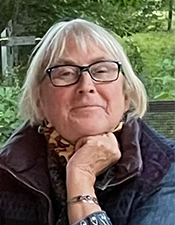 She was born on September 20, 1941, in Portsmouth, NH, to Harris Martin Rogers and Eileen Eastman Rogers. Priscilla attended Hampton Academy and Winnacunnet High school and graduated from Castleton State College with a Bachelor of Science. Her life's work was in education, social work and high school guidance.

Priscilla lived in Rutland, Mendon and Middletown Springs VT, also for a time, California. A descendant of the earliest settlers of Rye, Portsmouth and Hampton, NH, she later returned to live in her ancestral home in North Hampton where she had grown up.

Creative, selfless and a thoughtful listener and advisor, she was also a skier and stellar mom, friend of so many, traveler, literary enthusiast, master needle worker, restorer of antique quilts, lover of opera and the original definition of a DIYer. She would lend you a glove on the slopes, rustle up a unique costume for your theme party, dig up some of her garden for you if you said you liked the flowers, help you “rearrange” a stone wall, or flip 40 blueberry pancakes for family campers at your cabin.

She was a steward of conservation, and guardian, transcriber and sharer of our treasured family genealogy. Family and friends were often invited to visit, with just-baked yummies, home-cooked stews or a piece of our favorite apple pie. She was a family cornerstone to so many of us.

Priscilla was predeceased by Brooks Magoun and George Metalious.

In lieu of flowers, she would have encouraged monetary donations to your local food pantry or to the South East Land Trust.