Nicholas D. Kenyon passed away unexpectedly December 8,, 2021, at the age of 43. He is profoundly missed. 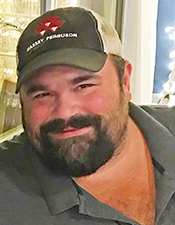 A fourth-generation Waitsfield resident (born March 12, 1978), Nick embodied the character of Vermont life. He had a strong sense of place, family and love of this land. He was a farmer, a merchant, a winter enthusiast and most importantly – he was devoted to his family and community. His vivacious personality and gigantic heart are legendary as are his determined character, loyalty and willingness to offer a helping hand. Many have said he was their protector; others remember fondly his enthusiasm for adventure and adrenalin, and even more will simply recall his contagious smile. It has been said that everyone has a “Nick” story.

Nick developed a love for road trips during his youth while racing snowmobiles across New England. More recently, he and Alison had been traveling the country with his daughters who are fierce Ninja Warrior competitors and his pride and joy. For both leisure time and in support of farm life, Nick had become involved in training and keeping cattle dogs, and he developed deep friendships amongst ranching communities in Texas and Oklahoma. We’d be remiss not to mention his canine companions and working dogs, Frito and Merle.

Nicholas is survived by his fiancée, Alison Martino; his daughters, Anna and Brooke Kenyon of Waitsfield; his parents Douglas and Donna Kenyon of Waitsfield; his sisters, Tricia Sanders and her partner Brad Haynes of Dallas, GA, Kristy Korrow and her husband Steve Korrow of Northfield, VT; his nieces Hannah and Ashley Korrow and his nephew Aaron Sanders, as well as a large extended family and circle of friends.

Nick was proud to be a farmer and together with his parents and Alison, raised beef cattle and managed more than a thousand laying hens. He considered it an honor to produce quality food for others and his support of the agricultural industry will live on through a special project being created in his memory with the Vermont Foundation for Agriculture and Farming. In lieu of flowers, his family asks that donations be sent in support of the project to https://members.vtfb.org/donation-validation/ or 117 West Main Street, Richmond, VT 05477

His immediate family will gather for a small, private memorial and then when the snow has melted, the grass is green and the calves have been born, they will host extended family, friends and neighbors at Kenyon’s farm for a Celebration of Nick’s Life – a “Nick-style” social gathering. Details to be announced.

“A thousand times we needed you.
A thousand times we cried.
If love alone could have saved you,
you never would have died.
A heart of gold stopped beating;
two twinkling eyes closed to rest.
God broke our hearts to prove he only took the best”
~ Author unknown