“When people are in need, you help. It’s for the kids.” 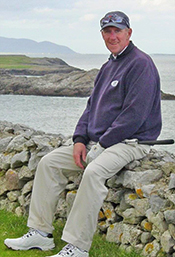 Richard “Whit” Whitworth lived by that adage. His grandfather, Sam, a dairy farmer during the Great Depression, gave food to those who needed it without expecting anything in return.

Whit learned from his grandfather and his father that a life spent giving was a life worth living.

Whit gave from the heart, humbly deflecting from his own successes to shine a light on those around him – ensuring that they had what they needed – encouragement, counsel and help – to realize their own potential. One could say, Whit was a present-day George Bailey – his life touched so many and his passing signals a great loss not only to his family, but to any and all who had the good fortune to know him.

Richard Allen Whitworth was born July 28, 1950, at the Melrose-Wakefield Hospital. He graduated from Melrose High School in 1968. In 1972, Whit graduated from Springfield College with a bachelor’s degree in Physical Education. He was one of the last draftees for the Vietnam War and fulfilled his duty in the National Guard for 11 years. He excelled in both basic and advanced training as a clerk typist, testing out of training. He spent his days in the company of generals and playing competitive racquetball with VIPs.

His avid interest in physical education led him to a career at the Jewish Community Center in Marblehead. Whit immersed himself in learning the culture and faith of the Jewish patrons, teaching swim lessons and other sports.

The Melrose Family YMCA was a home away from home for Whit when he was a child – he was active in a multitude of sports. Baseball, swimming, the Y’s leaders’ program, dances and more were an integral part of his formative years. He left Marblehead to go home to Melrose, where he began work as the Y’s aquatics director. He taught swim lessons and built a reputable swim team. His leadership and management skills in doing what he loved – helping young men and women realize their personal best – brought him recognition. In a few years, Whit was named the executive director. The YMCA staff was family and his “family” stayed together; a testament to his stellar management style. He remained as the executive director for 37 years.

Encouraging growth, building opportunities and treating others with respect is how he led and how he lived, growing the small Melrose YMCA into a multimillion-dollar operation. He added child care centers, after school programs, a sports and gymnastics center and oversaw the complete renovation of the 1895 building. Making numerous personal sacrifices over the years to benefit the YMCA and Melrose as a community, he became the first-ever YMCA National Childcare Champion. Innovator that he was he helped develop a software program used by YMCAs across the country.

Whit not only coached the Melrose YMCA and high school swim teams, he was part of the YMCA National Swimming Committee which planned and ran the annual national meet He also lent his expertise to the Boston Globe’s sports section’s “Ask the Expert,” contributing to the paper for a number of years. He was the tournament director for the MIAA State Swim and Dive meet for years before taking charge of all the formal meet entries. He is listed in the National Coaches Hall of Fame.

As a coach he belonged to the EMISCA (Eastern Mass Interscholastic Swim Coaches Association) volunteering for years as the treasurer. He was sought after for his expertise with swimming and diving software and timing systems. He worked with local colleges and universities including MIT, BU, Harvard, Northeastern, Wellesley and more. During the summer he ran championships for country clubs. Creating a great swimming experience for kids was truly his life.

Whit’s history with competitive swimming began when he became the first captain for the Melrose High School boys’ swim team in 1967-1968. He was the first coach of the girls’ high school swim team (coaching many champions). After the longtime coach of the boys’ team retired, Whit became their coach. His coaching style focused on technique, but also, developing the person – creating lifelong relationships with his swimmers and producing some of Melrose’s best swim team achievements. His main concern was the welfare of his swimmers. One year at the New England YMCA Swimming and Diving Championships, he mentioned to the meet director that the meet was running too long. Beginning the next year Whit started running the meet. That began a 45-year stint of running it, with his motto being, “It’s for the kids.” After 30 years, the meet was named for him – a dedication to the man who touched the lives of so many.

Some of those swimmers continued a friendship with Whit into their adult years. Though his coaching career ended in 2019, many still referred to him as “Coach.”

Whit’s other passion was playing golf. His golf idol was Hall of Famer, Payne Stewart, a man of faith, family and passion. Whit was a long-time member of Bellevue Golf Club in Melrose, serving as a past president and golf chairman. Along with partners Bob McQueen and Larry Breda, he won numerous tournaments, and was known for hitting the ball straight down the middle.

Whit never let health issues stand in his way – if that meant playing with one hand or competing on crutches – he established himself as a true competitor. He was called “mayor” of Sugarbush Golf Course in Warren, Vermont. He played at Sugarbush every year since its opening in 1961, including this past summer when he won the inaugural Senior Club Championship. In 2013 Whit, along with his friends, Tom and Julie Murray, started the Sugarbush Golf Club Ryder Cup. This tournament is the most popular event at the golf course, bringing together members and staff for a fun two-day event.

In the summer of 1988 Whit met his soulmate, Kimberly Surette, and they married in the fall of 1990. Inseparable, the two became a competitive golfing duo (after Whit taught Kim how to play). They traveled to incredible destinations to play their beloved game, including Ireland, Myrtle Beach, Florida and the Bahamas. Kim and Whit loved to go on adventurous drives, peaceful walks on the beach, and their time together was first, foremost and precious. They worked swim meets together, worked on their farm and watched their grandchildren grow.

Whit was extremely proud of his daughter Jennifer and all of her accomplishments. He watched her speak as the salutatorian in high school, swim in college as a walk-on, become a doctor, marry on the family farm and become a wonderful mother to her beautiful family. He would glow with joy when talking about her.

Whit’s second home was his grandfather’s dairy farm in Vermont. Every summer weekend he would drive up to mow grass, repair fences and maintain the land. He was so proud of the farm, and he loved the hard work it took to keep the land pristine. He enjoyed seeing the results of that labor of love and seeing his kids and grandkids enjoy it meant everything to him. Every summer, his grandchildren spent a week at the farm at “Grampy Camp,” where they swam in the river, played golf, built bonfires, watched movies and sports, and read and played games. He adored his grandchildren and was proud of their accomplishments.

Like a true New Englander, Whit loved the Patriots. He often spent his Sundays with his best friend, Tom McCarthy, watching the game with his beloved dog, Bailey, in his lap. When he wasn’t watching football, he was watching golf, the Masters being one of his favorites. Whit was gifted with tickets to attend a practice round at the Masters Golf Tournament, but due to bad weather, it was canceled. Though Whit was undergoing a bout with cancer, he kept the optimism he was known for – in true “Whit” fashion he was grateful to experience the bit of grounds he did get to see.

Anyone who knew Whit, knew he loved to read his sports page at breakfast. People would see him in town getting breakfast, newspaper in hand. He knew just about everyone – and greeted them with a handshake or a hello -- before he settled in to read uninterrupted.

Whit struggled with an autoimmune disease (Sjogrens) since the age of 36 that caused many health issues and he later dealt with multiple cancers. He didn’t complain. He fought. His doctors were amazed at his positivity and his strength. He survived multiple surgeries, skin grafts, chemo, radiation, immunotherapy and much more, beating cancer every time.

He dealt with more than anyone ever should. Through it all he kept his dry sense of humor and he loved to laugh. He loved his life. He loved his wife.

He was a coach, friend, father, mentor and husband. He is loved.

Whit was the beloved husband of Kimberly (Surette) Whitworth. Loving father of Dr. Jennifer W. Weidner and her husband Dr. Daniel Weidner of Bedford, NH. Cherished grandfather of Abigail, Colton and Morgan. Caring brother of Patricia Bemiss of North Reading and the late John “Buzzy” Whitworth. Beloved son-in-law of Janet M. Surette of Melrose. Loving brother-in-law of Jeffrey Surette and Brigitte of SC, Phillip Surette and Rosemarie of CO and Michelle Frost and George of NH. Former husband of the late Cheryl A. (Whaley) Winchell. Beloved uncle of Catherine Frost. Also survived by many other nieces, nephews and friends. Visitation will be held at the Gately Funeral Home, 79 W. Foster St. Melrose on Monday, December 27, 2021, from 4 to 8 p.m. A funeral service will be held at Incarnation Church, 425 Upham St. Melrose, on Tuesday, December 28, at 10 a.m. Relatives and friends are respectfully invited to attend. Please wear a mask if attending. Due to COVID the burial will be private. The Whitworth family is also planning a Celebration of Life at Bellevue Golf Club in the spring. In lieu of flowers, contributions in Whit’s name may be made to the Dana Farber Research Center, 450 Brookline Ave., Boston, MA 02214 or at www.danafarber.jimmyfund.org. To send a message of condolence please visit www.gatelyfh.com