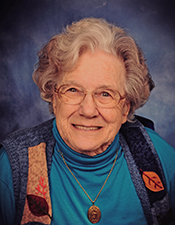 Gertrude (Trudy) Bapp Murphy passed on December 21, 2021. Born on May 1, 1921, in Underhill, Vermont, to Fred and Hattie (Brown) Bapp, the last born of 16 children, 12 who lived to become adults. She was educated in Underhill schools and then graduated from Burlington Business School.

She met Clifford (Skip) Murphy in Burlington and had their first date on New Year’s Eve, 1939, it was love at first sight and they were married on October 1, 1940. In 1943, son Michael joined the family and they moved to Moretown. Daughter Mary and son James came along.

She worked hard with her husband on the farm in Moretown; they raised their family and welcomed many others into their midst. Friends and brothers and sisters, nieces and nephews galore would come and spend time at the farm and made wonderful memories that have been treasured over the years.

With a strong work ethic, Trudy worked in Moretown for Ward Lumber Company and then in Ward’s General Store. She then became a clerk in the Moretown Post Office and eventually became the postmaster of that office in Moretown. She was immensely proud to serve her community. In younger years she was an active member of the Moretown Methodist Church, the PTA and other community groups. She will be remembered for her keen ability to remember dates, times and events.

Her beloved husband Skip died in 1995 and her faith was sorely tested when son Michael died in 2002, but her profound belief in the Lord gave her the strength to continue on.

She lived with her daughter and husband until 2014 when requiring more care than could be delivered at home she became a resident of Mayo Residential in Northfield where she enjoyed her time and made new friends.

She enjoyed her 100th birthday celebration at Mayo, despite COVID restrictions regarding family visitors. She enjoyed going over all the cards and well wishes that she received for that centennial achievement.

She was predeceased by her parents and siblings, husband Clifford (Skip), her son Michael and grandson Johnathan Murphy.

Mom found the heavenly gate and ended her journey on here on earth, the evening of the winter Solstice after living her life to the fullest and a remarkable 100 years. She now joins those who have gone before-but her love and spirit will remain forever in our hearts. And the Lord said, “Well done, good and faithful servant.”

Services will take place at a later date. Memorial gifts may be made to Mayo Continuing Care, 71 Richardson St., Northfield, VT 05663 or Moretown United Methodist Church, P.O. Box 516, Moretown, VT 05660 or a charity of your choice.