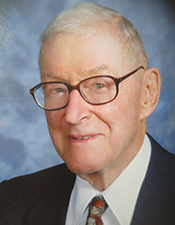 Thomas Wilson Folger of Ridgewood, NJ, and Fayston, VT, passed away on May 18, 2022, at the age of 94. He was born in South Orange, New Jersey, on November 2, 1927. The son of Riley Carlisle Folger and Margaret (Penland) Folger, Tom was a 1945 graduate of Columbia High School. He pursued his deep fascination for engineering at MIT, receiving bachelor’s and master’s degrees in mechanical and electrical engineering awarded simultaneously in 1949. Following two years of work in New York City and graduation from Harvard Business School in 1953, Tom served in the U.S. Army at the Pentagon in army ordnance procurement.

Upon his discharge, Tom left the East Coast for a job opportunity in Texas. It was here that he quickly discovered he was entirely too far away from New England and regular access to skiing, a love of which he had first developed on a high school ski trip to northern Vermont. He returned to New York and in 1959 joined Kidder, Peabody and Co. as a securities analyst specializing in technology. In 1966 Tom became director of research, and in 1974 became a member of both Kidder Peabody's board of directors and its management committee. His professional focus changed to corporate finance. In 1984, he and a former Kidder Peabody colleague founded a venture capital partnership that invested in technology companies.

During these years, Tom also became a part-time resident of The Valley. Subsequent ski trips had brought him to Mad River Glen and Sugarbush, where he found true joy on the slopes. In 1962, he purchased land and constructed a home and a pond on the former site of one of Fayston’s original farms on Number 9 Hill Road. Soon after, he became a member of the local horse community, riding with the Green Mountain Hounds on his indefatigable mount, Goldfinger. The process of clearing and maintaining the fields and forests as part of the area’s farming legacy became a passion for him, and he derived great pleasure from the sight of the Vasseur and DeFreest heifers that later grazed on the pastures that he had himself initially cleared. Through the next decades of his life, he was able to delight in sharing his love of The Valley and Vermont with his family and friends.

Although Tom’s pursuit of skiing took him to favorite slopes around the world, including St. Anton, Austria; Alta, Utah; and the Canadian Rockies, he was always restored and inspired by his work on his land and by The Valley community. He could most often be found mowing fields on his tractor or out in the woods with his trusted chain saw.

Tom is survived by his beloved wife of more than 53 years, Dorothy (Korn) Folger, and his two children, Martha Anne and John, his son-in-law Thomas Baker, as well as his grandchildren Willa and August.