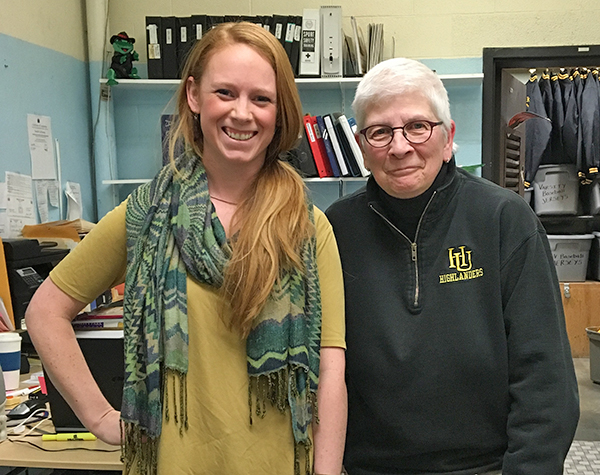 Harwood’s athletic director, Sue Duprat, is retiring after 14 years and she believes that the school is in a great position to hire her replacement.

Duprat is looking forward to spending time on other aspects of her life, outside of athletics. Ever since she entered the field she has worked nonstop, and it will be nice to be able to turn off her phone for a little while without having to worry.

Duprat grew up in the Old North End of Burlington as a member of a family in which attending college was a novel idea. Nevertheless, she graduated from the University of Vermont with degrees in political science and physical education in 1975.

She had intended to become a lawyer, hence the political science degree, but her basketball coach told her that she should get a degree in physical education just in case she ever wanted to coach.

A year after graduating she would begin her career at St. Michael’s College, just up the road from UVM in Colchester, Vermont. She would also start her career during one of the most historic time periods for women’s athletics, as Title IX had just been passed six years earlier.

Duprat’s physical education degree stemmed from some of the inequalities between the genders in athletics. “If a woman wanted to coach she had to be a physical education teacher. Men could be like a history teacher and they could coach basketball at their high school. But that never happened for women. The only path for women to coach was you had to be a PE teacher,” she said.

Beginning her career in a time when women were just stepping into athletics had its benefits and downfalls. “It was wonderful; it was a pain in the neck. It was a great time and it was a terrible time,” as Duprat put it.
She explained that she had to fight for everything she received, but almost all of her work was done outside of the eye of “the masses.” Meaning nobody was really paying attention. Additionally, everything that Duprat did was the first time that it had happened.

Duprat said she was, to the best of her knowledge, the first female administrator at St. Michael’s. Previously, if a woman was not a secretary at the school, they didn’t work there. Due to the novelty of the women’s athletics program, Duprat was, at separate times, the field hockey coach, softball coach, cheerleading adviser, lacrosse coach and volleyball coach and ultimately a basketball coach, which is the sport she loves most.

She spent the final 20 years at St. Michael’s as the associate athletic director.

“I have to tell you, it was crazy. It was crazy. You know the people who used to say women can't do anything because they're going to break or something. Or the fact that women are as competitive as men. I'll race you to the water fountain,” Duprat exclaimed. “So it really was tumultuous in the sense that everything you did was the first time it was ever done.”

Coming from such a hectic and eventful career at St. Michael’s to Harwood was definitely a change. “I don't know why, but they do the right thing a lot. And they did the right thing a lot. So it wasn't one of those places where you had to come in and say, well, we've got to fix all these things for women's sports,” Duprat said of the program.

Under Duprat’s tenure Harwood added girls’ hockey, lacrosse and volleyball, and most of the additions were in response to student interest.

With her departure, Duprat does not believe Harwood will falter at all. “Harwood is one of those places that through all our leadership changes has been a place that wants to do the right thing,” she said, and the program is in a perfect position to hire a great new athletic director.

Duprat is proud of the coaches she is leaving behind. She believes that they are one of the best parts of her program and that fact has made retiring a little easier, as Duprat knows that they will be able to handle and help any incoming athletic director.

Looking back at her career, Duprat understands that some elements of her job were “rocky,” and some people may be happy to see her leave while others are sad. However, Duprat did say, “I don't think I've ever been in a community that is as caring, is as helpful. They can be challenging. They will ask you the tough questions, but when you can answer the question, even if it's not necessarily the way they want to hear it, if you can be fair, if you can listen and you can answer their questions, then they're like, OK. I don't agree with you, but, OK, I understand where you are. And that's just a wonderful relationship.”