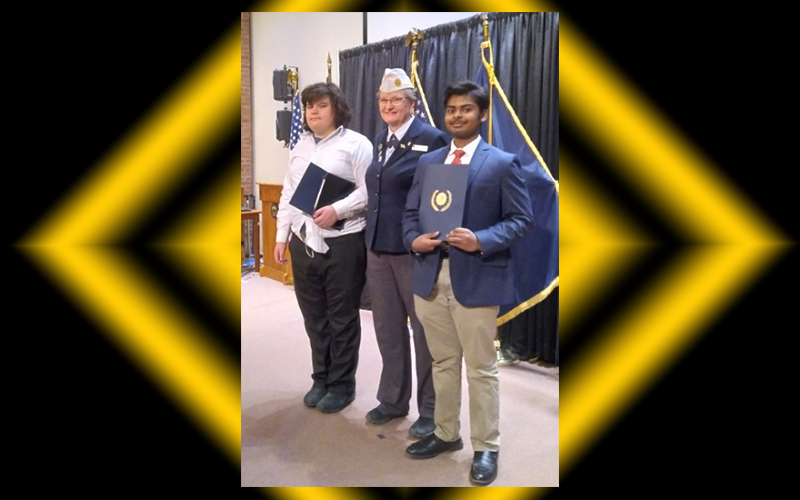 Reprinted courtesy of The Waterbury Roundabout.

Harwood Union High School junior Jeswin Antony of Waterbury recently came in first place in an American Legion oratorical contest, and he will participate in a national competition in Indianapolis on April 24.

This was the third year that Jeswin was a finalist in the Constitutional Speech contest.

The event took place in the Pavilion Auditorium in Montpelier on March 5, according to Karlene DeVine, oratorical chair for the American Legion Department of Vermont.

Jeswin’s first-place prepared oration speech titled “We, the Cyber Patriots” proposes a 28th Constitutional Amendment to discourage misinformation, bullying and abusive practices on the internet. In it, he reflects on his experience and that of his two younger brothers and how young people lack the understanding to navigate misinformation online.

The speeches in the competition are scored on a variety of factors such as time, content and public speaking skills. The oration is done without the use of a microphone, podium, or notes. Students are allowed to present the same speech with revisions in subsequent years. Jeswin delivered an earlier version of this speech at last year’s competition and won second place.

The runner-up at the state competition, Sharon Academy junior Michael Christesen, took home a $750 prize. Although Vermont has five American Legion districts and each could enter a contestant in the competition, DeVine said this year’s event had only two entrants.

In the prepared oration round of the competition, subjects must be on some aspect of the U.S. Constitution with an emphasis on the duties and obligations of citizens to the government. Speeches are eight to 10 minutes in length.

The annual contest also includes an extemporaneous round. The organization announces four new topics each May. At the competitions, one topic is chosen, and contestants are given five minutes to prepare to speak for three to five minutes. This year’s topic focused on the 14th Amendment section which prohibits anyone who has gone to war against the union or given aid and comfort to the nation's enemies from running for federal or state office without special permission from Congress.

The competition is for high school students under age 20 and it begins at the local American Legion post level with a two-round state contest in each state.

Jeswin now will represent the legion’s Department of Vermont at the National Oratorical Finals, April 22-24 in Indianapolis. The national American Legion covers travel and lodging expenses for the winning student and a parent.

The national competition features 52 students from each state and one each sponsored by American Legion chapters in Puerto Rico and France. At the national contest, students compete for scholarships with the top prize a $25,000 award. Each winner from the first round receives $2,000.

The final round with the three contenders will be live-streamed Sunday, April 24, on American Legion TV.

Jeswin is the son of Aero Antony and Antony Gnanapiragasam. He is sponsored by Waterbury’s American Legion Post 59. His contest prize included $1,500 from the American Legion Department of Vermont.

More information is online about the American Legion Oratorical Contest.