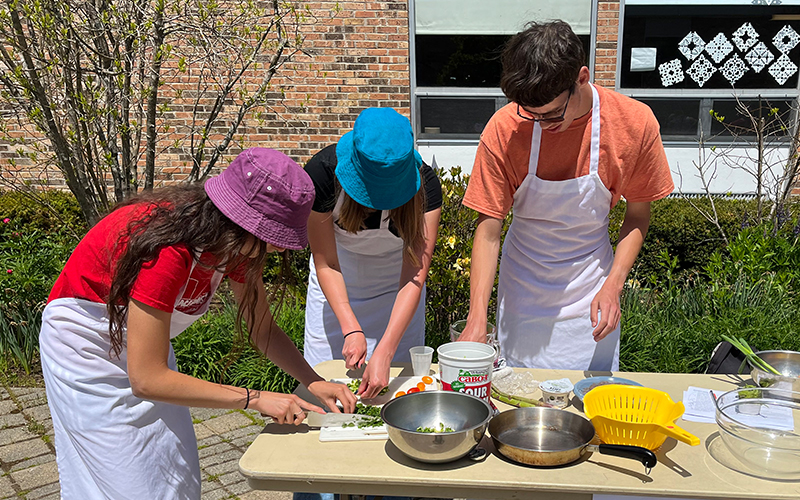 After competing in a statewide junior Iron Chef competition at the Champlain Valley Expo on April 2, Harwood Union High School students decided to organize their own cooking competition at the school. Junior Amy Cook organized the event with support from farm to school staffer Paul Kramer. The event, held May 25 during Harwood’s spirit week, pitted five teams of four representing each grade and a staff team against each other in a friendly battle of the chefs.

“It was great to be in the fresh air surrounded by classmates cheering on their grades," Cook said. “The seniors took the win with their super delicious dish! The judges were made up of two of my junior iron chef teammates [who competed in the statewide competition], one of my principals (Laurie) and our beloved front desk lady! Overall, about 24 students were involved in the participation during the competition but it was a school-wide event and the garden was fully packed!”

“It was a very successful event, and most importantly, led by the students in the farm to school club who participated in the state-wide event back in [April],” Kramer said. “Amy Cook was the lead on this and did an absolutely amazing job conceptualizing the event structure and making logistical considerations to ensure it function seamlessly.”

“My biggest highlight of my school year was definitely participating in the actual statewide junior Iron Chef competition with my own classmates,” Cook said. “Once the idea to do a small version of this competition hatched, we got straight to work. With the help of Paul, the leader of the farm to school club, and my other members, I was able to organize this incredibly fun spirit challenge. This was the first time this competition has been done during Harwood’s spirit week and it will not be the last. I am so grateful and proud to have been part of creating this tradition and unite my school’s community together.”

The senior team won with their dish of lentil and spring green fritters with roasted asparagus topped with feta and a cucumber yogurt sauce on the side.