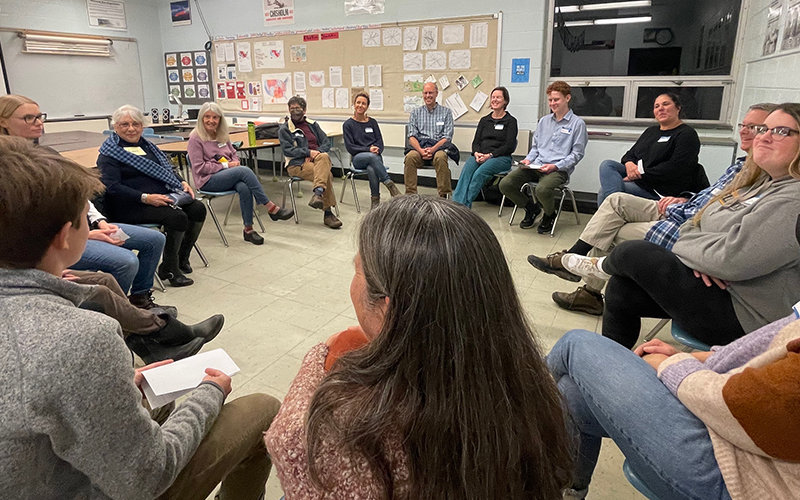 “What does it mean to forgive?” That was the question at the Socrates Café at Harwood on December 6. For the first time in three years, students, administrators, school board members and community members of all ages gathered at the school to engage in civil dialogue to discuss a timeless and timely question. The event was led by students from the Harkness Leadership class, which is an elective English course at Harwood Union High School. The class came up with the question after several brainstorming sessions. Students from the class, which is mostly comprised of sophomores, led community discussions in groups of 15-20 people to bring the community together.

“Kids in the class study deeply the art of talking. The Harkness pedagogy is student-driven inquiry,” teacher Kate Stauss said. “We unpack complex texts. I do not tell them which way to lean; they unpack together. I’m in the background making sure the right questions are being asked. We spend a lot of time talking about the value of leaning in and listening to other people and finding ways to new understanding. This is the culmination of the semester.” Students Kelsey O’Brien and Libby Spina help Stauss design the class, which Stauss said is a class made by students for students.

At the top of the discussion, students emphasized this was not a debate and there was no ‘right’ answer. They also encouraged moments of contemplative silence and urged participants to “listen deeply and think deeply.” Students emphasized that participants may leave with more questions than they came with, which, they said, is a good thing. “We want everyone to walk away still wondering and deepen their learning by learning from others,” Reilly said.

Topics of conversation amongst the groups included why we forgive, who it serves, whether forgiveness comes naturally or is taught and how we can forgive ourselves, among many other thought-provoking questions. Some participants shared very vulnerable and personal stories, which were heard with empathy and understanding.

Asked about the goals of the event, Stauss said, “First and foremost, to bring back what had been a tradition and had been such a successful way of the community interacting with Harwood students. The second was to be able to remind people in the community that we have shared values. Even if we don’t know each other, there are places of common ground that we can begin to see each other in a more humane way. The vulnerability and honesty and willingness of people to talk about this topic really blew me away.”

Asked if she would take some of what she learned during the dialogues and apply it to her life, Holly O’Brien, Waterbury, said, “Absolutely. The takeaway for me is that forgiveness is different for everybody and you can learn from each other’s forgiveness.”

“It was definitely enlightening for me,” student Seneca Whittingham, Waitsfield, said. “I really enjoyed listening to other people’s perspectives form all different ages and I could also tell some people had had different experiences than me and that their ideas on forgiveness were different than my own, and I really appreciated that.”

Estelle Bayard, an exchange student from Switzerland, said it was her first time participating in a discussion like this. “It was really amazing. I learned leadership skills.”

“We really wanted to invite people to have a meaningful conversation with people they weren’t necessary friends with or familiar with, and I think that really happened and was really successful,” Kelsey O’Brien, Waterbury, said. “How people are so willing to be vulnerable and open up to people they don’t know is really inspiring and eye-opening for me.”