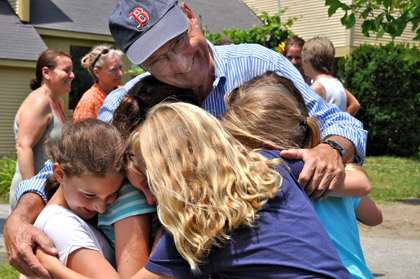 “It’s you again,” a woman joked as she hurried by, ushering a group of kids down the hallway towards their next summer camp station.

“I know,” Andreas Lehner replied. “You can’t get rid of me.” But while Lehner may have been back at the Warren School, his visits there have become just that—visits.

Lehner retired this year, after 24 years as the elementary school’s principal. When he accepted the job back in 1988, after another eight years as principal at Harwood Union High School, “It was the best decision I ever made,” he said.

“There’s something incredibly special about [The Warren School],” Lehner explained, and part of it comes from the school’s perfect size. At 180 students, “you get to know all the kids and their families,” he said. “It’s very personal.”

Lehner was sitting on a bench in the school’s main hallway, and as he said this—almost as if on cue—a small child came by to give him a hug. In the speech he made at his recent retirement party, Lehner joked of his “rock star status” in the preschool, but it’s easy to see he wasn’t entirely joking. “I tried not to let it go to my head,” he said, laughing.

Lehner is proud of the close relationships he’s developed within the school’s community, but it wasn’t always this way. Twenty-four years ago, when he first came to the Warren School, “there was a split between parents and teachers,” Lehner explained. Back in 1988, when Lehner told teachers that he was planning on hiring Laurie Jones as the new school secretary, one of them protested, saying he couldn’t hire her because she was a parent.

Over the years, “there’s been a lot of evolution,” Lehner said, as he’s worked hard to break down the barrier specifically between parents and the school. “One of the things we’ve sort of figured out is what I like to call ‘customer service,’” Lehner said.

In his conception of “customer service,” the parents are the customers and they are the ones who make the decision to move to Warren and enroll their children in its school system, Lehner explained. “Parents ‘hire us’ to educate their children,” he said, and he believes it’s the school’s job to keep them informed and involved in the educational process.

Of course, the educational process itself has also evolved during Lehner’s time as principal. “In the old days,” Lehner said, “we used to give kids standardized tests based on national norms that had no particular relation to what we were teaching,” and because of this, teachers essentially disregarded the tests’ results.

Now, students take standardized tests designed by the state instead of the federal government, and “they’re meaningful tests,” Lehner said, so teachers actually pay attention to their outcome.

Teachers now structure their lessons in ways that will help students perform well on the tests, and as a result, students are learning more and more. “[The tests] are a good tool for improving the quality of education,” Lehner said.

Unfortunately, not all the changes Lehner has experienced during his time as principal have been as positive, as a new act in the state Legislature is currently focused on consolidation of Vermont’s schools.

Historically, the Warren School has had its own school board, which solves problems and makes decisions that are right for the school and directly answerable to voters, and “that direct line is really important,” Lehner said.

As Lehner has left the school, it’s now up to his successor as principal, Wendy Cobb, to “resist the pressure” from Act 153 and help keep the Warren School special, he said. As it stands, the school can potentially apply for a waiver to avoid consolidation in the coming years.

“I’m really hopeful [for the future of the school],” Lehner said, and he maintains a tremendous amount of confidence in its staff. After all, he’s been there so long that today, “nearly everybody at the school is there because I’ve hired them,” he said.

And what’s next on the list for Lehner himself? “A lot of traveling,” he said. He and his wife will be spending two months in France starting next month, and when packing for his trip, Lehner will be sure to include the “Prakticello,” a travel-friendly cello the Warren community gave him as a retirement gift.

As to how else he’ll occupy all of his newly acquired free time, Lehner isn’t sure yet. “There are a lot of things I want to do,” he said. And there is so much he’s already done, for the Warren School, and for its teachers, its parents and its students.