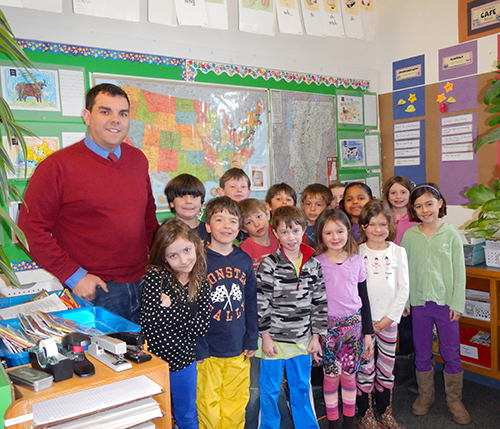 Last month, students in Tom Young's first- and second-grade class at Waitsfield Elementary School read Beatrice's Goat, a story "about a girl who got a goat and she didn't think it was going to do anything ... but then it started making milk," one student explained.

By reading Beatrice's Goat, "we got to learn about animals and how they help people," another student said, by providing families with food and a steady income. The goat came from Heifer International and after learning more about the nonprofit organization, the students in Young's class launched a "Read to Feed" fundraising campaign to support it. As of Tuesday, March 25, they had raised $3,500.

Students raised money by reaching out to family members and friends and asking them to pledge an amount for every book they read during the month of February. They read dozens of books and received pledges in the amount of 25 cents a book to a one-time $200 donation.

The fundraising campaign combined many topics Young's students have been studying, including geography and technology. They tracked where their donations came from with pushpins on a giant map of the United States and some donations came "all the way from Europe," one student said.

Students also used social media to reach out to potential sponsors. "We tweeted," one student said, and they used Facebook and YouTube to get the word out, creating a video explaining the story of Beatrice's Goat and Heifer International and asking people to donate.

In the end, "did you guys make a difference?" Young asked his students.

Moving forward, the students will peruse Heifer International's website and talk about what they want the money they've raised to purchase for those in need.