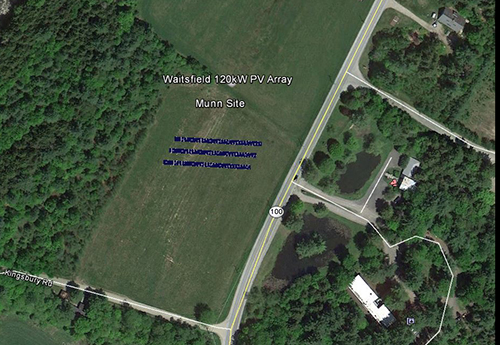 Waitsfield is moving forward with plans to bond for a solar panel array at its town garage next month, although the select board balked at citizen requests to bond for underground power on Bridge Street at the same time.

The select board held a March 27 special meeting to work on approving the wording for a bond vote warning for a solar array that would supply most of the electricity needed for the new town offices, the fire station, the Wait House, the school, the town garage, the library and the street lights on Bridge Street.

The town is working with Nils Behn of Aegis Renewable Energy, Waitsfield, on a project that will cost $355,000, less any grants received. It would feature 400 solar panels and would produce 119,000kWh per year. Waitsfield (and Warren) are applying for grants from the state of Vermont's Clean Energy Development Fund. The maximum allowable grant amount is $125,000. Grant applications are due May 9.

And while the board approved the documents necessary to move forward with a May 6 bond vote and a May 5 informational meeting at the school at 7 p.m., the meeting became another referendum on the issue of underground power on Bridge Street.

At the meeting, the select board faced a roomful of people who wanted to revisit an issue that was hotly debated at Town Meeting on March 4 – the issue of putting the power on Bridge Street underground when the town undertakes road, drainage and covered bridge repair work on Bridge Street this summer.

At Town Meeting in 2013, voters, after much passionate discussion, approved spending $50,000 to install underground power conduits on Bridge Street when the road and bridge work was done. The plan was to install the conduit when the street was torn up and at a later date have the wires pulled through to get the power underground. The select board decided not to pursue that when Green Mountain Power balked at having empty conduits and costs of the project escalated.

At Town Meeting this year the issue came back and was subject to more intense discussion, two paper ballots and two proposed amendments to Article 8 which called for allocating $75,000 for repairs to the covered bridge.

Those amendments did not pass and the select board, during the public forum portion of its meeting last week, was asked by a group of people to bring the issue to the entire town for a vote. At Town Meeting, proponents asked first to have $400,000 added to Article 8 and then $350,000 added to Article 8. At last week's meeting proponents re-raised the proposal from 2013 to simply ask voters to approve just enough money for undergrounding the power ($56,000) as well as asking voters to approve enough to complete the project.

Former select board member Bill Parker along with Bridge Street resident and property owner Sam Gulisano were among those who asked the select board to bring the issue before voters along with the solar array bond vote.

Gulisano stressed the historical importance of the covered bridge and Bridge Street to the town, noting that returning the street to the way it looked before power was important. Select board chair Paul Hartshorn asked him if he'd prefer to see the street returned to dirt as well.

Bev Kehoe urged the board to bring the issue to the voters noting that it was a good solution and cost effective.

Members of the public challenged the notion that the conduit could not be put in ahead of time and asked the select board to "stand up to Green Mountain Power."

"It is my understanding that Green Mountain Power did not refuse but that it was not their preferred option," said select board member Sal Spinosa.

"The question is really are you willing to ask the public for their opinion, thoughts or vote, or is this decision made here?" Bill Parker asked.

"Can I ask the select board to consider bringing this back to the voters, at least to the point of putting the conduit in?" Parker asked.

The select board voted only to bring forward the solar array bond vote, although Spinosa said he would have supported bringing both items to the voters.

Select board members, after the meeting, suggested that the cleanest way to get the underground power issue to voters would be to petition the select board to bring the article for a bond vote. If that happened, the board would postpone the work on Bridge Street until after that vote.