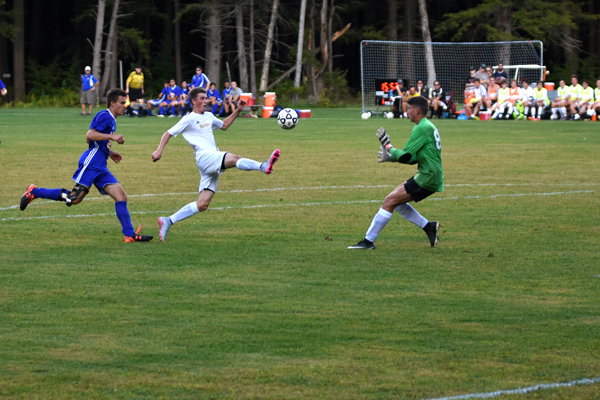 Harwood boys’ soccer shut out Lamoille for their second win of the season.

Harwood Union striker Will Lapointe drew two penalty kicks and his teammate, Wyatt Adams, netted them both in to give the Highlanders a 2-0 lead. Lapointe scored a goal of his own later in the second half and Noah Williams tallied the final goal for Harwood.

Harwood goalkeeper Max Hill did not have to make many saves throughout the match as the Highlanders dominated the pace of play and kept the ball in their attacking half for the majority of the evening.

Even though it took a couple of penalties to get on the scoreboard, Haddox thought the offense was working well.

“We were really creating a lot of opportunities in the run of play; by our count I think their goalkeeper had four really elite saves,” Haddox said.

While Adams carried the ball up field, Lapointe used his speed to create opportunities on offense, but it was his contributions on defense that stood out to Haddox. He said that his striker is able to press the ball well putting pressure on the Highlanders opponents.

“The speed is fantastic, but the ability to work not on the ball is really awesome,” Haddox said.

Adams, a junior, was involved in each goal-scoring effort on Monday.