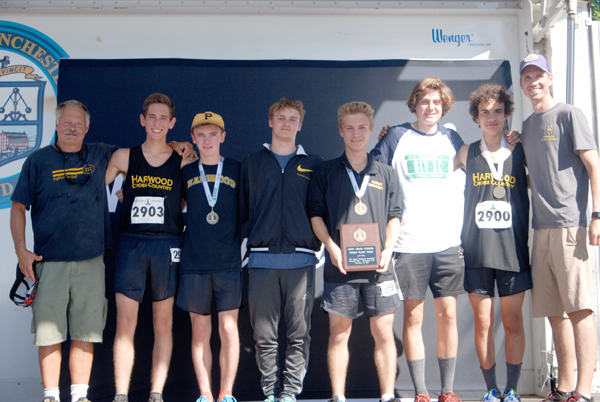 The Harwood cross-country varsity team traveled to Manchester, New Hampshire, on Saturday, September 23, to compete in the Manchester Invitational. Billed as the New England Small School Championship, the race is limited to schools with fewer than 1,200 students. With an enrollment under 600, Harwood easily fits into the small school designation.

“I like to take the kids to New Hampshire to get away from the hills of Vermont,” joked head coach John Kerrigan before the race.

Then he got serious, saying, “Actually, this is a pretty hard course that starts with a long uphill and finishes with a long uphill plus the finish line is higher than the start. But it’s a big meet with lots of teams from throughout New England. There are several JV races, the large school race and, of course, the small schools race that we are in. For several of our runners today this is the biggest race they’ve ever been in. There are over 200 runners in each race, there’s music playing, there are vendors selling food and shirts, and there are long lines for the toilets … all things they are going to have to deal with at states next month. We often see PRs (personal records) here even though the course is difficult.”

The girls went first and were led by Erin Magill, who finished fourth with a time of 19:58.

“The course was soft today and it’s really hot,” she said after the race. “I was about 30 seconds slower than in this race last year, but I felt like I ran well and I moved up two places in the standings from last year.”

“I was proud of Erin today — I watched her work with a very nervous group of girls,” Kerrigan said after the race. “Mackenzie and Kaia are freshmen running varsity for the first time; they ran with grit and are developing as strong runners. Maggie is new to the team this season and passed out in the heat midrace last week, but she put that experience behind her and got a PR today.”

“The boys had some great grouping today,” said assistant coach Andrew Reid. “It’s great to see a pack of Harwood runners going by together. They really push each other that way.”

“The trifecta of Anthony, Brendan, and Daniel really worked it today,” Kerrigan said. “Daniel led at the 1-mile mark, Brendan led at the 2-mile mark, and Anthony came out just ahead. They all push each other, and they were also pushed today by Hanover standout Morgan Baughman, who ran for Harwood his freshman year before moving to New Hampshire. Morgan finished between Anthony and Brendan, so you had three Moretown kids all within a second of each other near the front of the pack. If there was a ‘small town’ race, Moretown would have won it today."

“Not far behind them you had the dynamic duo of Seth and Jesse,” Kerrigan continued. “They also work together, pushing each other. They have improved tremendously and a big part of the podium finish is due to their efforts. Look for them to keep moving up.”

Seth added, “We’re going to close the gap between us and the front three. We just need to run faster.”

In the end, only three runners ended up getting PRs (Maggie, Walker and Brendan), but it was very hot day and runners were slowed by both the heat and the soft terrain. But cross-country isn't about times; it is about challenging the elements. And the Harwood guys and girls showed that they can run with the best despite the tough conditions. Coach Kerrigan summed it up this way: “I was proud to be their coach today!”