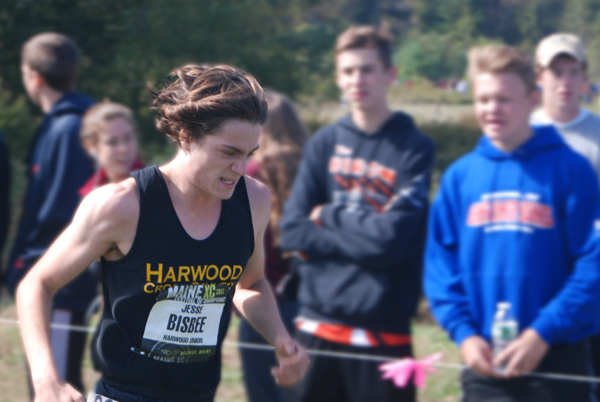 The Harwood cross-country team traveled to Belfast, Maine, for the Festival of Championships on Saturday, September 30. Twenty-nine runners had personal bests and an additional 15 runners had their best times of the season.

The meet consisted of teams from over 80 schools – nearly every high school in Maine plus teams from New Brunswick, Prince Edward Island and every New England state. “The competition here today was fierce,” said head coach John Kerrigan. “This year the field was the largest ever. There were several powerful teams from southern New England – schools that have twice the population of Harwood. The fact that it is the site for the 2017 New England championship attracted schools that want to gain an edge in November.” In order to accommodate the number of runners, the meet was divided into seven separate races. Overall team scoring was calculated by determining the fastest times from all the races.

The first race of the day set the positive tone for the Harwood runners. Acme Wasi started out hard and fast and near the front of the pack. Then he just stayed there to finish in third place. Wasi’s time of 19:50 surpassed his personal best from 2014 by 16 seconds. He was followed by teammate Alan Clark in 11th place with a personal best time of 20:08. “Watching Acme taking third in the unseeded A race was a highlight for me,” Kerrigan said. “Acme trained hard all summer and it showed. He ran one of the smartest and strongest races I have ever seen.”

The second race featured a strong showing by sophomore Maggie Alberghini, who finished in third place with a new personal best time of 22:11, good enough to give her fourth in the overall team standings at the end of the day. “Maggie is our dark horse,” coach Kerrigan said. “She came to us from the soccer team this year and she’s steadily improving and moving up in the pack.”

The third race was highlighted by the strong performances of Jesse Bisbee, who finished second with a time of 17:53, and John Henry Bond-Bardes, who was seventh in 18:16. “Jesse was in bed with a fever the night before the race and almost didn’t run today,” Kerrigan said. “John Henry is a second-generation Harwood runner. His running style and his determination are reminiscent of his father back in the day.”

The fourth race of the day was the freshman girls’ race. Mackenzie Greenberg paced the Harwood squad with a time of 22:40 for 49th place. She was followed by Hadley Kielich (23:59, 84th) and Kaia Levey (24:20, 93rd). Kerrigan was all praise: “Our freshman girls are gaining confidence and momentum. The three of them looked quite rattled as the gun sounded in the field of nearly 200 runners. As they ran you could see them gaining confidence. By the end, they were seasoned cross-country runners. It was fun to sit back and watch their evolution.”

The fifth race was the freshman boys’ race and featured three boys in the top 50 in the field of more than 200. Luke Groom ran an impressive 18:14 for 22nd place. Also in the top 50 were Carlton Cummiskey (32nd, 18:38) and Vincent Spina (43rd, 19:04). “These freshman boys are really impressive,” Kerrigan said. “They may encourage me to stick around for a few more years. I’m really looking forward to watching them grow as runners.”

After the freshman races were the seeded races. These are the fastest races of the day. In the girls’ seeded race, Erin Magill finished 11th in the field of 250 with a time of 19:07. She was followed by Julianne Young (45th, 20:16), Jordi Kulis (90th, 21:11), Willa Yonkman (157th, 22:18) and Katie Ferguson (171st, 22:34). “Erin gained some valuable experience running against some of the top competition in New England and I’m anxious to see her return to Belfast on November 11, when Maine hosts the New Englands at this site,” Kerrigan said. “And sophomore Julianne Young improved on her personal record by an incredible 27 seconds. She’s ready to crush the 20-minute barrier.”

In the boys’ seeded race, the trifecta of Brendan Magill, Daniel Bevacqui, and Anthony Palmerio once again led the team. Trading places throughout the race, Brendan came out on top with a time of 16:58 for 47th place in the field of nearly 250. Just behind him were Bevacqui (54th, 17:03) and Palmerio (62nd, 17:12). Not far behind the three of them was Seth Beard (132nd, 18:07). “The spread between Brendan and Anthony was only 14 seconds, but there were 15 places,” Kerrigan exclaimed after the race. “That shows you the density of the pack. The only other place I’ve seen a pack that dense was at the 1999 U.S. Junior Olympic National Championships in Portland, Oregon!”

Overall, the girls finished 17th and the boys finished eighth. “At first glance, it might look like we didn’t do as well as we have in the past at this meet,” Kerrigan summarized. “In 2013 both the boys and girls were on the podium. But the meet has grown tremendously since Harwood first started attending in 2011. There are dozens more teams than then. There were over 1,600 runners today. It was an outstanding day for our team. This whole trip was outstanding. We received numerous complements everywhere we went, the hotel, the restaurants, you name it. These kids are great.”