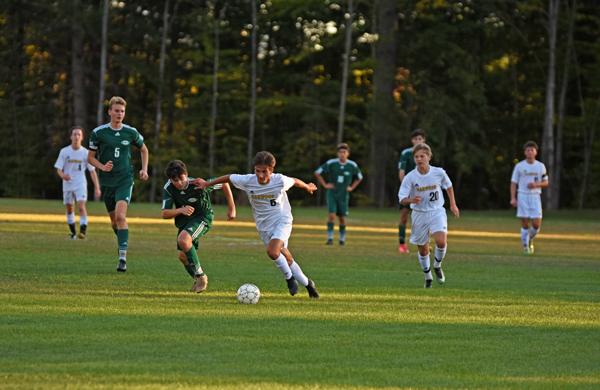 Harwood boys’ soccer narrowly defeated Montpelier to improve their record to 3-2 just before entering a tough stretch in their schedule.

The Highlanders caught a break early on when a Montpelier defender, trying to clear the ball, headed in a cross from Will Lapointe.

The rest of the game was largely played in the middle of the field with few scoring threats from either team.

“I am happy that we won. I am certainly not satisfied with our performance and hopefully the kids aren’t either,” Harwood head coach Don Haddox said after the game.

Even though Harwood won on the scoreboard, Haddox said that it essentially was a scoreless game. Harwood happened to get lucky.

“I just don’t think we are executing things technically very well. I think that we see a handful of things that are creative and good ideas, but we just aren’t quite at a point where we are able to execute the things that we see,” Haddox said.

The Highlanders may have been slightly rusty. The match against Montpelier on Monday, October 2, was their first match in two weeks due to some rescheduling.

Harwood will need to improve immediately as they play eight games in the next 18 days. They started with Randolph at home on Wednesday, October 4, and then will travel to Green Mountain Valley School on Saturday, October 7.