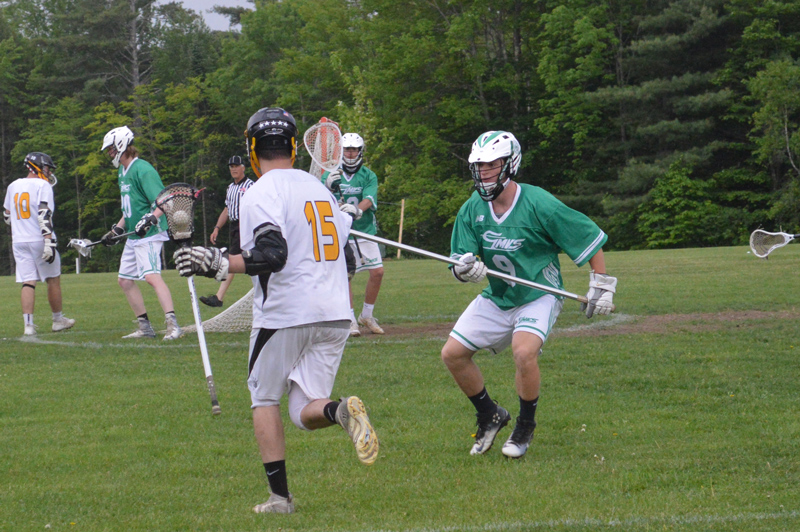 Friday, June 1, the No. 1 ranked Harwood boys’ lacrosse team hosted rival, No. 9 seeded GMVS for the quarterfinal match up. Going into the game, Harwood finished their regular season with a 14-0 record and had previously beaten GMVS on June 25.

In the first quarter, Harwood came out strong and scored two goals before being interrupted with an hour-long rain delay.  When the game was back in action with 1:57 left in the first Highlanders fired off two quick goals ending the first half 4-1.

“I didn’t know how the delay was going to affect the boys, but it seemed to be just what they needed,” said head coach Russell Beilke.

At the end of the second with grey clouds still looming overhead the boys’ lacrosse team didn’t stop the roll they were on. At the end of the second the score was 9-2. Harwood’s senior class came up big, leading the team with a strong offense, landing their shots in the back of the net. Hunter Wimble had two goals, Connor Woolley had three, as well as junior Ely Kalkstein, and senior Noah Williams had four.

The final for the match up was 14-3 with Harwood advancing to the semifinal round which will take place at home at 4 p.m. on June 5 against No. 4 seeded Stratton Mountain.

When asked what the HUHS team can take away from the GMVS victory, Beilke commented, “Hard work doesn’t stop. We need to stay focused and we can’t look ahead past anybody.”