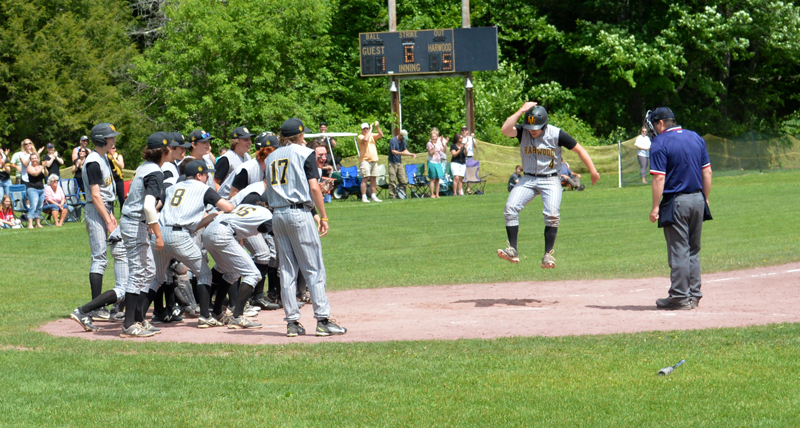 On Saturday, June 2, the Harwood varsity baseball team hosted the quarterfinal round against rivals U-32. In the top of the first inning with Jake O’Brien on the mound, the Highlanders’ defense was strong. With one strike out to start the game, one out in the outfield and one on the hot corner at third base from junior Bobby Kelly, who had four outs in the game from third base, ended the inning with a throw to first. First up at bat for the Highlanders was a leadoff double from O’Brien who was left on base in scoring position.

Both teams were playing strong defensive games in the early innings; Harwood was the first to break the barrier in the bottom of the fourth inning when Bobby Kelly scored the first run.  Cameron Joslin hit a single RBI followed by Evan Llewellyn and O’Brien who both batted RBIs. The top of the fifth inning U-32 tried to make a comeback hitting a double off of O’Brien and scored one run against Highlanders, the inning ended with an out at the fence catch by outfielder Dan Greene. The score at the bottom of the fifth was 4-1 in Highlanders favor.

At the top of inning six, Highlanders switched pitchers relieving O’Brien and putting Beckett Richardson on the mound. Starting off the inning with two walks, Highlanders pulled together to get three outs starting with O’Brien turning a double play and out number three coming from the outfield. Bottom of the six inning Wyatt O’Brien started off a rally with a home run which resulted in U-32 switching pitchers. Jake O’Brien hit in an RBI behind him, Ryan Semprebon hit a single to follow up. With the score 7-1, the Raiders put in another relief pitcher, Chase Reagan and Kelly hit singles. The score starting the top of 7 was 9-1 which would be the nail in the coffin-ending result.

Head coach Mitch Casey at the end of the game concluded, “That’s Harwood baseball in a nutshell.” When asked what the team will be working on for semifinals, Casey said, “Business as usual, working on the little things like bunting.” Against U-32, the Highlanders stole a high amount of bases, “If it’s open and we have a chance, we’re going to steal. We’re going to run till you catch us,” said Casey. The baseball team will host semifinals against No. 6 seeded Lake Region on Tuesday, June 5, at 4:30 p.m.