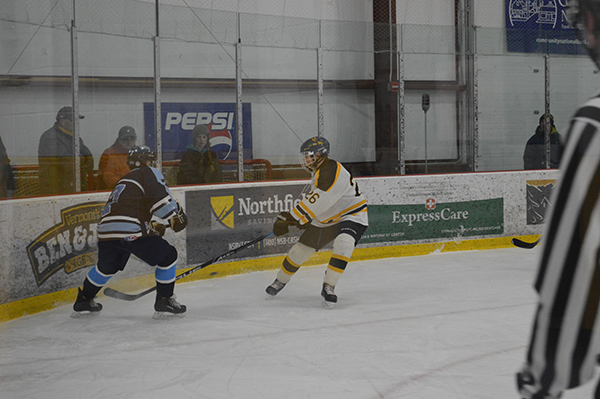 There was a Skimeister division where athletes competed in both the alpine and Nordic events of the carnival. One of the unique features of the combined race is the Skimeister champions, awards for the top combined skiers. Brendan Magill placed fourth in the boys’ overall performance in the combined score.

“We came over here and didn’t know what to expect, but our kids just gave it everything. I’m proud of them,” said Harwood Nordic coach Tom Strasser.

Gretchen Kogut finished second in the girls’ alpine race and her teammate Aliza Jernigan placed sixth, leading the girls to a second-place finish in their portion of the event.

“Mackenzie went out front from the start and smoked the field today,” coach Strasser said. “She broke a pole in her last race, so it was good to see her come back strong from that disappointment.”

Brendan Magill finished third in the boys’ race, followed by Carlton Cummiskey in fourth and Jesse McDougall in fourth.

Varsity girls’ hockey hosted the Woodstock Wasps at the Ice Center of Washington West in Waterbury on January 26 in a game that would go to overtime.

In the first period, Harwood would get up on the board first with a fast break from team leader Lilianna Ziedins, who would take the puck all the way from the Harwood defense blue line. Ziedins wove her way around three Wasp players to find the back of the net ending the first with Harwood leading 1-0.

The Wasps came out with a buzz of energy and scored their own goal to tie the game under a minute into playing time. Both teams were able to capitalize on breakaways up the ice with the goaltenders for both teams coming up strong and blocking the shots. Woodstock would get a penalty that with 0.45 second left in the period that would carry into the third.

Both teams played back-and-forth hockey in the third. Woodstock was called for tripping with 1:50 left in playing time. The Wasps were successful on their penalty kill and wasted the clock. In overtime both teams tried to find the back of the net, the game resulting in a 1-1 tie.

On January 26, the middle and high school wrestling team traveled away for the Vergennes tournament.

High school wrestler Sully O’ Hara at 170 pounds took fourth place. “We had the opportunity to wrestle different wrestlers who traveled from out of state. We saw improvement on the mat and we are planning on continuing improvement so wrestlers reach their peak for states at the end of February,” said head coach Casey Moulton.

The varsity hockey team hosted the Mount Mansfield Cougars at the Ice Center of Washington West on Saturday, January 26, in what would be a neck-and-neck game.

Highlanders struggled with keeping their composure in the first period, racking in a total of five penalties before the buzzer. MMU came out strong and took advantage of Harwood’s penalties to score their first goal on a power play. MMU’s Patrick Burke was an unstoppable force, either scoring or assisting every one of MMU’s goals. They would go on to score two more in the first while Harwood was able to get a wraparound goal from Skylar Platt assisted by Finn O'Hara with 20 seconds left in the first.

In the second, both Harwood and MMU were stride for stride in speed and aggressiveness as the penalty box was a revolving door for matching penalties. Harwood was able to get a second goal in by Jake Green assisted by Jake Wells and Ollie Hammond.

In the third, with the score 3-2, Harwood was unable to capitalize on rebounds. The Highlanders pulled their goalie after a timeout in the remaining minutes. The buzzer would beat out the Highlanders’ last chance to score, ending the game in MMU’s favor. Sean Russell had 31 saves for Harwood and Joseph Mascolino had 41 for MMU.

Boys’ basketball traveled away to face Lyndon on Friday, January 25, in what would have Lyndon coming out on top. Michael Fuller for Harwood had led his team with 10 points.

Head coach for the team Mike Woods said that the team showed some rust after not having practices for a week and a half due to weather and school cancelations. Woods said that his team struggled with turnovers.

“Offensively we just missed a lot of good shots; we had good looks but we couldn’t knock ’em down,” said Woods.

Harwood had them on their heels all the way till the half when they were tied 25-25. With less than five minutes left in the game and Harwood trailing by four points, Lake Region started to stall the ball. Harwood would go on to foul defensively, and Lake Region hit all of their foul shots.

“Defensively we did a lot of really good things; compared to the Lyndon game we improved tremendously,” said Woods.

For Harwood, Max Hill had 13 points, Will Lapointe had 13 and Charlie Zschau had nine.