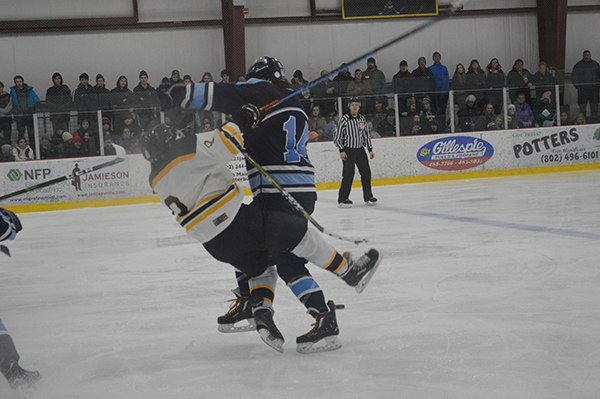 On Monday, January 28, the boys’ hockey team hosted neighboring rivals U-32 at the Ice Center of Washington West in a game that went into overtime (OT).

Coming off a recent close game loss, Harwood (HU) wasted no time in taking control of the game in the first period. They were able to control puck play in the offensive zone and deliver quick tape-to-tape passes in front of the net.

Harwood’s revolving penalty door first swung open for defensemen Ollie Hammond for a hooking call. U-32 was able to work the Highlanders’ zone on their power play to sink one in from the slot at 9:18 in the first.

HU was able to cycle the puck down low. Skylar Platt was able to sink one in from the slot from a pass from Finn O’ Hara and Gavin Thomsen to tie the game. HU, not finished for the period yet, had the puck carried full ice by Luke Spaulding and Tanner Woodard to draw the U-32 defensemen out wide for a laser pass on the goal line to Jonathan O’Brien, who would pick the top right-hand pocket for a goal. In the remaining minute and a half, HU would get called for interference and start the second period up 2-1, with a penalty.

Both teams stepped up their games as both goaltenders had lightning-quick glove saves. At 9:37 U-32 tied the game up after sending one to the low left pocket. U-32 was able to capitalize on center ice changeovers in puck possession.

With 3:06 remaining U-32 added to their lead after sinking one in after a mid-ice turnover turned into a breakaway. Harwood could not capitalize on rebounds enough to sink one in trailing 3-2.

HU was issued a game misconduct at 7:30 for Harrison Wheeler’s missing earpiece in his helmet. The minutes wound down and HU called their timeout with 1:47 remaining, as crowd members questioned if head coach Shaun Morse would pull the goalie. HU struck some luck as U-32 was called for a slash at 1:25 remaining; HU pulled their goalie after this as U-32 called a timeout with 29.1 seconds to go. With 17.3 seconds left to go HU scored to keep themselves alive with a goal by Ollie Hammond assisted by Finn O’ Hara.

Tension skating in a thin edge, Harwood was able to keep the puck in their offensive zone. With 1:17 left in OT, U-32 was called for roughing to finish the time one man down; the penalty, much to the U-32 bench’s disagreement, had the faceoff in U-32’s zone. With 21.1 seconds left Finn O’ Hara scored off a faceoff from Skylar Platt and Gavin Thomsen for the game-winning goal, Harwood victory 4-3.

“I feel like we started the game really well last night focused on passing and playing a team game, and as the game progressed we got away from that and that's when we struggled. All in all I think we played well and I would like to see us play all 45 minutes of team hockey and see how we do,” said coach Morse.