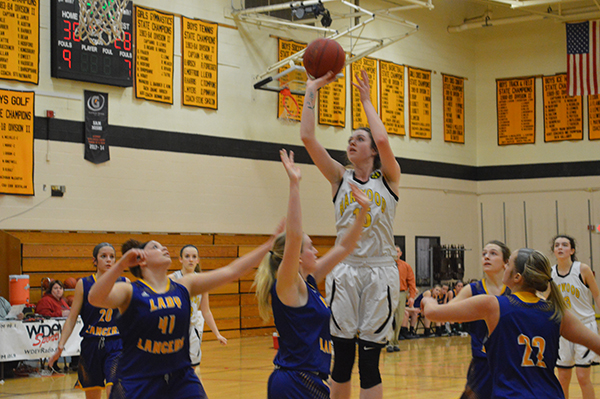 On Monday, February 25, the Harwood boys’ varsity team traveled to play an afternoon game against Lyndon Institute that would be a close match all the way to the buzzer.

At 9:29 into the first period, Harwood’s Ollie Hammond found the back of the net to get Harwood on the board first. Hammond was assisted by Skylar Platt. Harwood would take that lead into the second period.

At 3:28 into the second period, Platt scored a goal of his own. Platt was fed by Finn O'Hara. A minute and a half later, Lyndon scored their first goal from Steven Ferraro. Lyndon wasn’t done for the period as two minutes later Lyndon scored again, this time by Hugo Nilsson.

Lyndon came out strong in the third period, scoring just 1:50 into the period with a goal by Martin Rudolf. One minute later Harwood tied the game up with a goal by Finn O'Hara assisted by Skylar Platt. As the minutes wore down in the third, Lyndon was able to pull off the win with a goal from Steven Ferraro to take the lead and steal the game. Harwood’s goaltender Liam Guyette had 33 saves on the night while Lyndon goalie Bryce Champney had 25.

Girls’ ice hockey hosted the Brattleboro Colonels at home on Monday, February 25, in a game that wouldn’t see much action until the final five minutes.

In the first period, the Highlanders struggled to connect passes at mid ice. Brattleboro defense tried clearing their zone, but to no avail, as the clear would go long distance for multiple icing calls. With seven minutes remaining Harwood goaltender saved two shots at close range, one being a rebound to keep the score 0-0 heading into period two.

Brattleboro started off the second period with breakaway just minutes into playing; luckily for Harwood defense, the Brattleboro player brought it full ice with the shot going wide of the net. Harwood would get on the board first with a goal by Arianna Loomis assisted by April Tousignant. After killing two of their own penalties, Brattleboro was able to score their first goal to tie the game with less than a minute left.

“It was a back-and-forth game for the first three quarters. In the fourth, Montpelier was able to force a few turnovers and build a lead which they never relinquished,” said head coach Mike Woods.

Harwood was on the road against Lamoille on Monday, February 25. Harwood would start the first quarter strong with a short lead, before Lamoille would take it over and control the rest of the game at the half. Max Hill had 13 points and four rebounds, Michael Fuller had six points and three rebounds, and Andrew Proteau had six points and six rebounds.

“Despite limiting Lamoille to only five points in the first quarter, the Highlanders struggled to put the ball in the basket all night long and eventually Lamoille started to score and went on to the victory,” said coach Mike Woods.