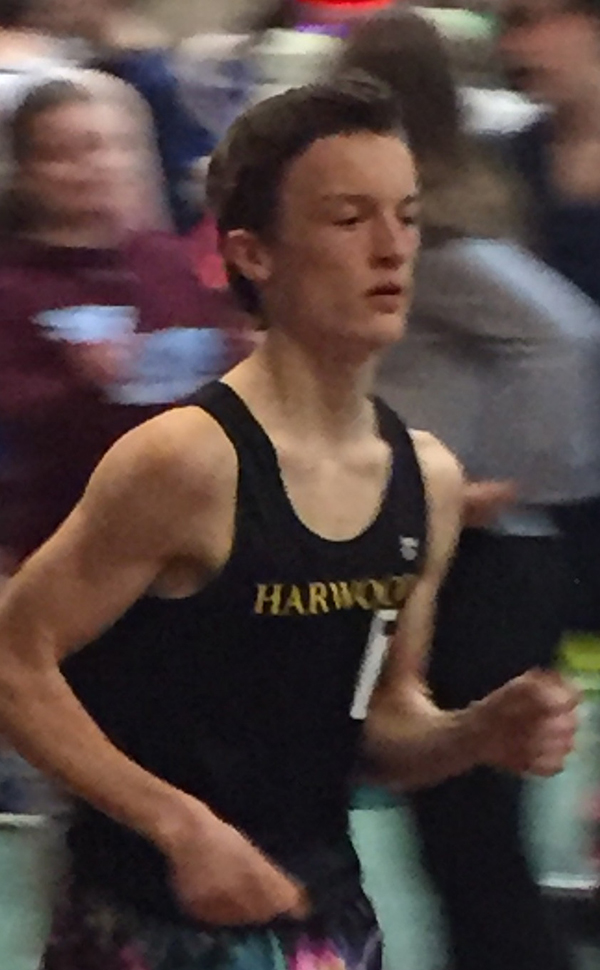 Boyden also qualified to be one of six Vermont high school students invited to run in the New England 3,000-meter championship, which includes Division I athletes.

“I am extremely proud to have qualified for New Englands! I have been dealing with a few minor injuries so I had been worrying about how I would perform at the New England qualifier, but I was feeling healthy, and I'm confident I raced the best I could have,” said Boyden.

Boyden is the only athlete on Harwood’s indoor track team. Boyden trains at UVM’s indoor track simultaneously with his other sport, Nordic skiing. Boyden finds time to train with both teams and compete for both. Last fall Boyden ran with the high school’s cross-country team as well.

“Training for indoor track has been very difficult because I am also on the Harwood Nordic ski team, meaning I have to be careful not to over train, because I could get a serious injury. On average I will attend ski practice four days a week and run two or three times a week, one of which will be a fast-interval workout on the track,” said Boyden.

Boyden runs the 1,500- and the 3,000-meter event for indoor track for Harwood. Neighboring schools such as U-32, St. Johnsbury, Burlington, Essex and Oxbow all have an established indoor team. Boyden has been running since middle school and found out his passion for the self-driven sport in an unexpected way that paid off later.

“The first time I was involved with competitive running was in seventh grade when my mom signed me up for the cross-country team without telling me. In the beginning I was very angry, but before long I realized that the cross-country team was an absolutely fantastic thing for me to be a part of as well as the fact that I discovered a love of running,” said Boyden.

The New England meet that Boyden qualified for will be held on March 2 at the Reggie Lewis Track and Athletic Center in Boston. Boyden said that he has been running as much as he can to prepare for the event while also competing for Harwood’s Nordic squad.

As a freshman, Boyden has a few more years before looking at colleges. Asked if he would be interested in attending a secondary institution and competing at a higher level for indoor track, he said, “I am definitely planning on attending college. Although my main focus would be academic, a good cross-country and track program would be something I would look for.”