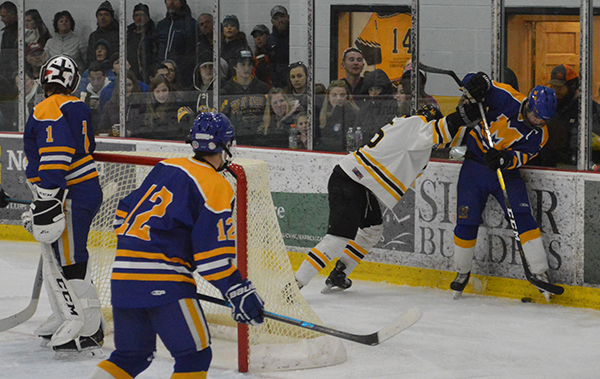 Harwood started off strong, scoring in the first period with a goal by Jake Green, assisted by Skylar Platt and Reid Spaulding. Harwood would hold the 1-0 lead until the last 12 minutes of the third period.

With 12:12 left in the third period, Milton was able to score the tying goal to keep them alive past Harwood goaltender Sean Russell. As a snowball of miscommunication continued, Harwood was called for a hand pass in Milton’s zone resulting in a faceoff in Harwood’s defensive zone. From that faceoff, Milton was able to crowd the net and screen Russell that allowed for an on-ice goal at 10:03 taking the lead.

Harwood called a timeout to regroup. With just under eight minutes left to play, the puck was sent to the right corner of the Harwood zone. With plenty of time to break the puck out of their zone, Harwood missed their opportunity and had the puck taken off a defensemen’s stick. A pass to a wide-open Milton man in the crease would find the back of the net increasing the lead 3-1.

Harwood struck some luck when at seven minutes to go Milton was called for a center ice hit for an elbow. At 5:32 left, Harwood was able to score a power play goal from the point. Ollie Hammond scored off a pass from Tyson Slyvia and Finn O’ Hara to tighten the score to 3-2.

In the last minutes Harwood lost their composure, playing the body instead of playing the puck. This allowed Milton to control possession and mid ice to cut off any passes Harwood attempted to set up. At 0.45 on the clock Harwood pulled their goalie. Harwood’s Jake Wells was called for a cross check at 26.6 seconds remaining, which put the puck back in Harwood’s zone for the faceoff. The 3-2 loss would end the Highlanders’ season at 7-9-3.

Harwood hosted the quarterfinal round against CVU at the Ice Center of Washington West on Tuesday, March 5, where the lady Highlanders would pull off the win.

Harwood scored just 5:24 into the first period on an unassisted goal by senior captain Lilianna Ziedins. CVU was quick to tie it up, scoring not more than five minutes later and keeping the score 1-1 till the second.

In the second, CVU received two penalties at the same time, one call for a cross check and one a slash, which would work in Harwood’s favor as senior Erica Dow was able to score an unassisted goal. Minutes later Harwood would add to their lead by one, as Ziedins would score her second unassisted goal of the night.

The third period started off with a 3-1 lead. As head coach for the Highlanders used to say, a two-goal lead is the most dangerous. CVU scored a goal with 11:42 left in the third that would go under the Harwood goalies glove. Harwood would score at 7:39 with a goal by Sarah Garvin, assisted by Kailie French.

As the minutes wore down, CVU was called for a hooking penalty as both teams would call their timeouts in the last five minutes of the game. Harwood would go on to win 4-2 and advance to the semifinal round that is to be determined.

In the quarterfinal game on the road against the third-seeded Fair Haven, sixth-seeded Harwood, coming off a spectacular win in playdowns, could not find their groove.

Head coach for the Highlanders said that Fair Haven came out strong and had one sophomore who had over 20 points. Harwood struggled to make baskets in the first quarter of play but was able to come back to reality in the third, where they only lost in points by four.

The Highlanders were able to tie in scored points in the fourth quarter, but the damage of the first half was already done. Freshman standout Mia Cooper was triple teamed on the court all night in an effort to stop her effortless control of the game. Cooper finished with seven points; Ashley Proteau had six.

Harwood boys’ basketball hosted Randolph for their senior game on Saturday, March 2, in what would be a senior-led victory, 67-54, according to head coach Mike Woods.

Andrew Proteau had 20 points, Max Hill had 10 points, Will Lapointe had nine and Charlie Zschau had seven. “It was a great senior day and nice victory,” said Woods.

In a playdown game against the fourth-seeded Mill River, 11th-seeded Harwood traveled to play on Tuesday, March 5, in what would be the last game of the Highlanders’ season.

In the first quarter Mill River was leading 12-9; the lead would deepen before the half with Mill River leading 26-14.

“They were a good team. They hit key three-point shots. At one point in the third, we had it at a six-point game and then they had one good shooter who hit two three-pointers and all of a sudden it was a 15-point game again,” said Woods. Harwood finished the third down 41-31.

Lapointe had 15 points and Zschau had 14. “I’m really proud of my team for playing hard and tough and we gave them a game definitely,” said Woods.

Girls earned second overall last Thursday, February 28, at the freestyle state championships event at Craftsbury Outdoor Center. They were in third going into the afternoon's freestyle relay race and walked away with a second.

Freshman Ava Thurston won the freestyle individual event with a time of 14:37 beating all skiers from Division I and Division II. The closest skier was DI skier Rose Clayton from Mount Mansfield Union, almost a minute back. The closest DII skier was Maggie Magee from Lamoille Union almost two minutes behind.

The girls’ race was won by Thurston, followed by Mackenzie Greenburg with a time of 17:47, Sydney Kulis, Julianne Young, Caeyln McDonough, Taite Plagge and Hadley Kielich.

Tom Strasser, coach for the team, said, “The girls’ relay was led by Mackenzie Greenburg who skied the first leg. Mac blasted out of the start line and finished her leg by passing four teams in the last 300 meters. Julianne Young skied second and held on to Harwood’s position. Skiing way above her experience and ability, Julianne (who learned to ski just two years ago) skied alongside the best in the state and held the team's position. Sydney was third and halfway around the lap, just behind a group of fast DI skiers. She dug down deep to keep up with the speeding group. In the end, Syd skied the second fastest lap for Harwood. The final leg of the relay was skied by Ava who skied the 2.5K course in a blistering 6.16 seconds, the fastest leg by any skier. The girls placed second causing Middlebury, who held on to a second-place overall lead going into the relay, to fall to third overall for the day.”

The boys’ team earned seventh for the day. The boys were led by sophomore Carlton Cummiskey with a time of 15:54 and who was closely followed by senior Brendan Magill, seven seconds behind. Sophomore Hale Boyden, the third skier, was followed by sophomore Mason Berry, fourth; freshman Gus Mosle, fifth; and freshman Ebbe Mosle, sixth.

The boy's relay was skied by two freshmen, a sophomore and a senior. The youthful team's first leg was skied by Cummiskey, who got out to a good start; second was Mason Berry, who handed off to Gus Mosle, who used his alpine skiing skills to rip the downhills. Brendan skied the fastest and final lap of the day for the team as he hammered to the finish. The boys finished fifth in the freestyle relay and on the day.