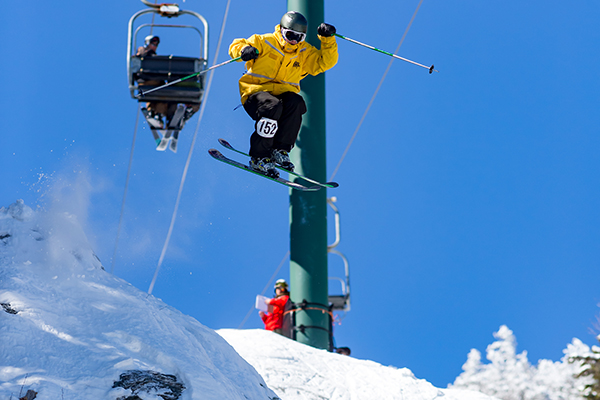 Expert skiers and riders were invited to surge off the cliffs and drops of Sugarbush’s most challenging terrain in the 22nd annual Castlerock Extreme, a stop on the Ski the East Freeride Tour.

The Castlerock Extreme is the longest running, unconventional terrain competition on the East Coast. Skiers come to Sugarbush annually for the chance to compete against fellow winter athletes on Castlerock Peak’s terrain. The run down the mountain has steeps plummets, moguls and drops.

During the March 9 event, competitors were scored on their line, control, fluidity, technique and style by three judges; the winner skied away with a cash prize.

In the men's division, Cooper Whalen came in first with 124.5, followed by a tie for second place with Miles Heespelink 121.5, and Chase Mohrman 121.5. In fourth place was Pete Johnson with 118.5, and rounding out the top five was Ethan Mosedale with 114.0.

For women competitors, Chloe Mello finished first with 105.0; in second was Naomi Niles-Racusin with 98.5; third, Natalie Slade with 85; fourth was Mathilde Fromigue with 82.5; and fifth was Kara McCue 76.0. 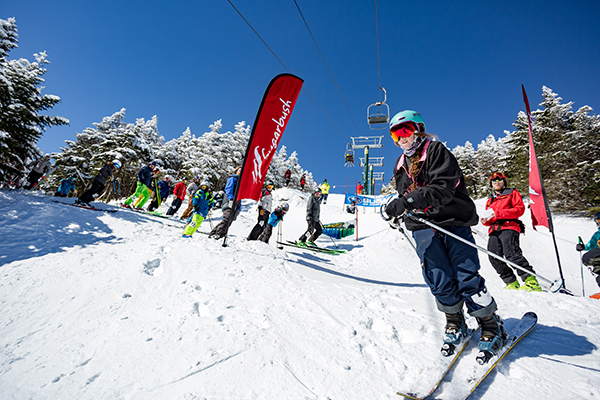 One of the many competitors in the March 10 memorial event at Mad River Glen in honor of the late Ryan Hawks. Photo: TJ Greenwood.

A competitive skiing memorial event dedicated to the late Ryan Hawks that took place at Mad River Glen on Sunday, March 10, was sold out and had over 100 competitors for the preliminaries.

The race preliminary was held on Gazelle under the double chair where 67 skiers qualified for the finals on Sunday, on Lift Line under the Single Chair.

The mountain was on a wind hold, as individuals weren’t sure the event would happen at 11 a.m. as planned. At 10:55 a.m. the Sunnyside Double lift opened and competitors hiked from the bottom of Paradise to the mid-station where a couple of snowmobiles towed people to the start of the freeride competition.

For the female skiers, Caroline Price of Canada came in first place with a score of 41.853, and in second was Jennifer Masztal of the United States with 18.200.

The event was judged by six International Free Skiers Association (IFSA) judges on both days. With the two divisions – a senior and a junior division – the junior event was an IFSA 3-star national event, one of only two held on the East Coast for getting spots for national rankings. The adult competition was a free ski world regional qualifier.

The competition is named in honor of Ryan Hawks with a goal of raising awareness for the Flyin’ Ryan Hawks Foundation (www.flyinryanhawks.org). The Ryan Hawks Memorial is both an IFSA 3-Star Junior National Event and an IFSA Adult Freeskiing World Qualifying 2 Star competition and is also part of the Ski the East Freeride Tour.

After the competition, Peter Hawks, Ryan’s father, spoke with Mad River Glen’s marketing director, Eric Friedman, and said, “I was literally inundated in the lodge and in the lift line and on the hill with expressions of support for what we do and how we do it.”