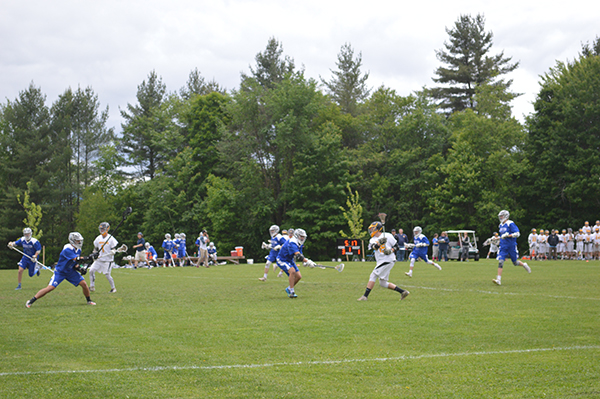 This season the girls’ varsity softball team has 15 girls playing, almost double the numbers of last season’s roster with three seniors leading the team. When asked what the team is looking to improve upon after ending last season, in his fourth year as head coach Ed Lamson said, “I’m looking to improve on our hitting; a lot of games we just didn’t hit. I’m really looking forward to our defense this year. I’m stressing that in practice and I think this team will be the best I’ve had defensively.”

Lamson has one assistant working with him, Katie Gagne. Lamson’s favorite thing about coaching Harwood softball is watching his players improve on their skills. “My favorite thing about coaching is just watching the girls’ progression from year to year. We will be working a lot on defense and knowing what to do in certain situations,” said Lamson.

Boys’ lacrosse had 41 student athletes in its opening week. Head coach Russ Beilke, in his 10th season, said he hopes the team will continue the momentum off their previous season. Last spring, the Highlanders had a perfect season, winning the Division II state championship 10-1 over the U-32 Raiders.

“We have a brand-new team, 15 freshmen. We are returning several key players. Three of them are our captains, Jake Wells, Ely Kalkstein and Sully O’ Hara,” said Beilke.

While Beilke doesn’t expect his team to go 17-0, he does plan on being a contender for another state championship. So far in the first week his team has been in the gym working on defensive strategy, as weather fluctuates from one side of the spectrum to the other. Beilke said his team is working out the kinks and getting used to each other. “It’s all about the fundamentals, from the best players to the youngest players,” said Beilke.

Girls’ lacrosse also has a high number of athletes trying out in its opening week with 32 players. In her first year coaching for Harwood as head coach, Hillary Wheeler said that the team will be split with 18 on varsity and 14 on JV.

When asked what the team was looking to improve over last season, Wheeler said conditioning and game execution.

“As a team we will be focusing on our conditioning and tying together all the different parts of the game they already know how to execute really well. Specifically, we will be working on our midfield transitions and as always our stick skills. This team consists of solid athletes who are focused and ready to put in the work to come together as a team,” said Wheeler.

From a coaching standpoint, Wheeler is looking forward to having fun and seeing her players’ potential while helping them get to their best level.

Dana Marchitelli is joining the coaching staff this season as the assistant, as well as Harwood alum Kayla O’Toole, who will be back and in her third year coaching the JV program.

When asked what her favorite part was about coaching, Wheeler said, “So far it is their enthusiasm to learn and try new things; they love lacrosse and are putting in the time and effort at practices showcasing this. They are also really supportive of each other and want to learn together as a team.”