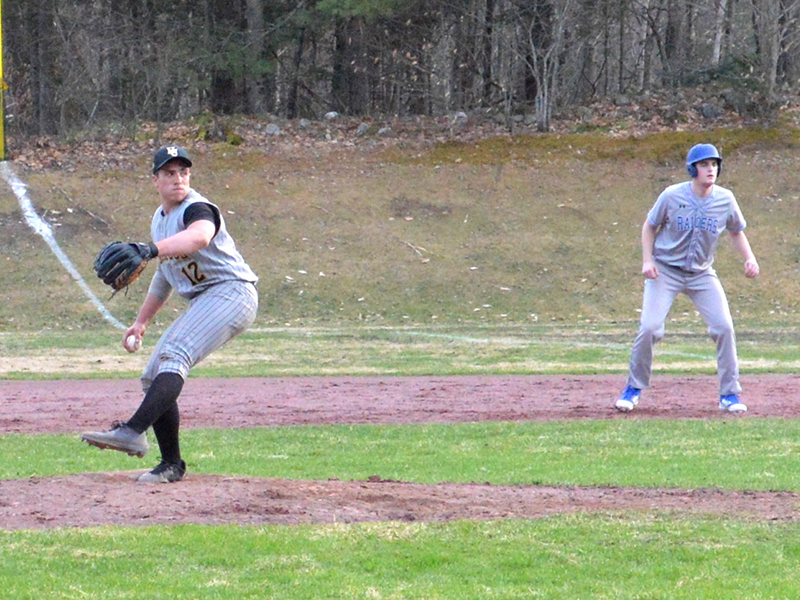 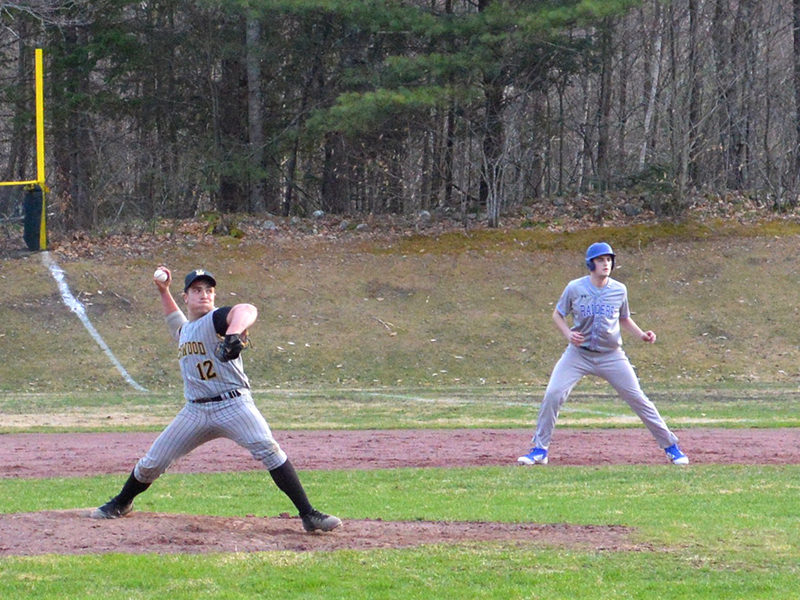 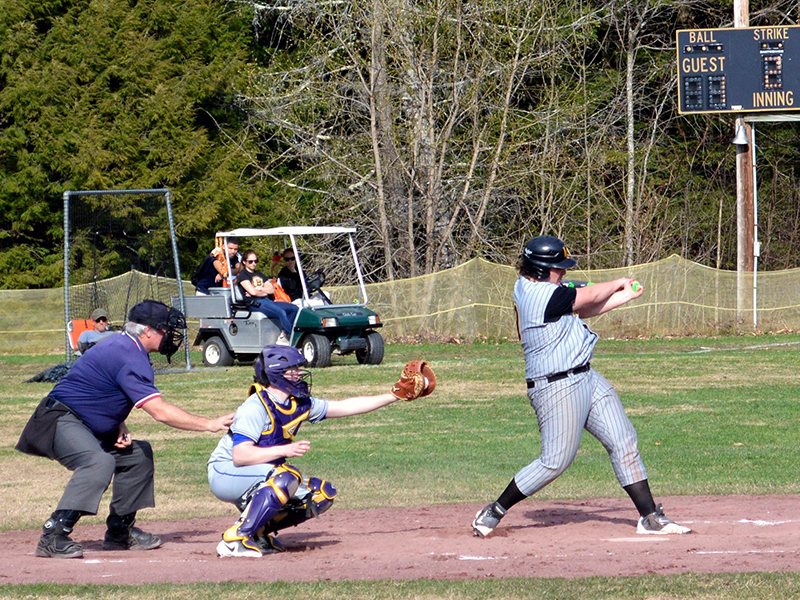 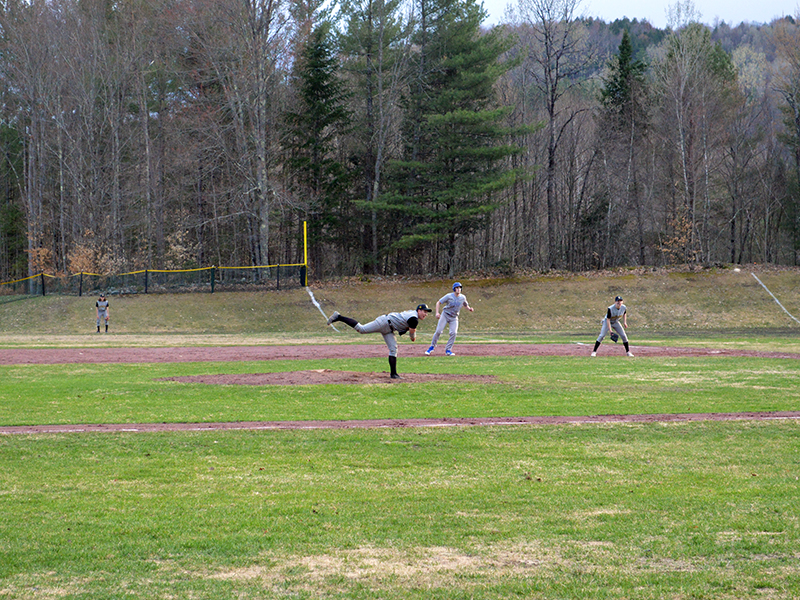 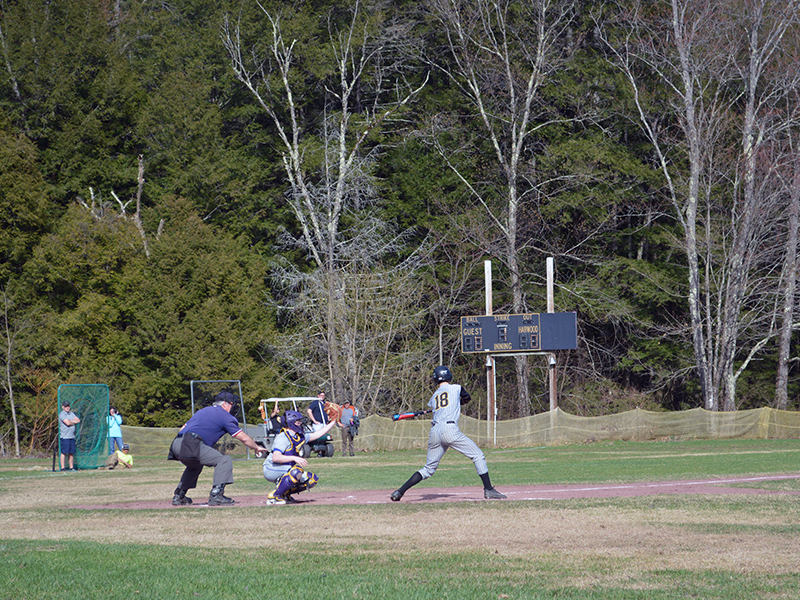 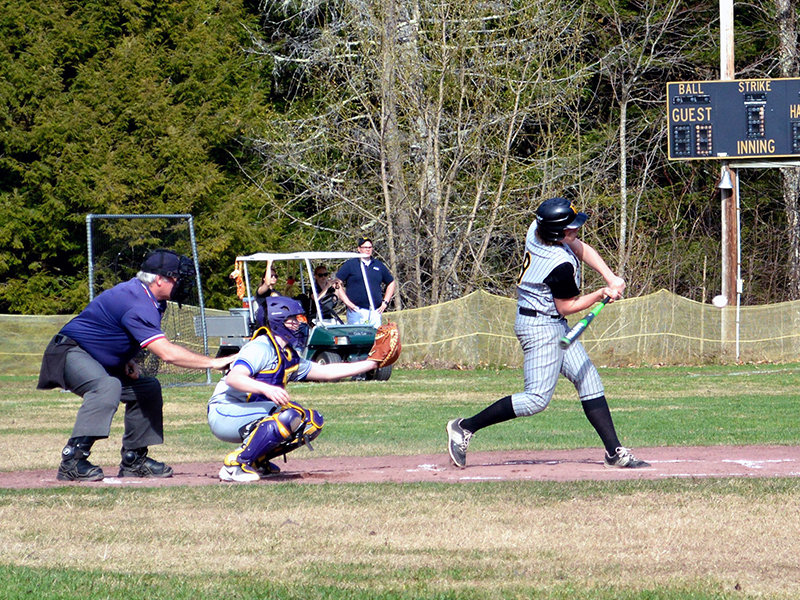 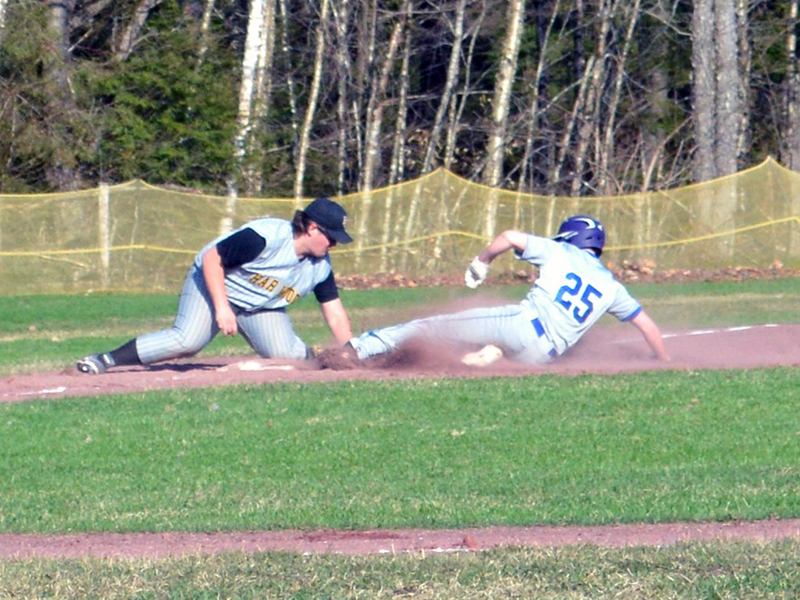 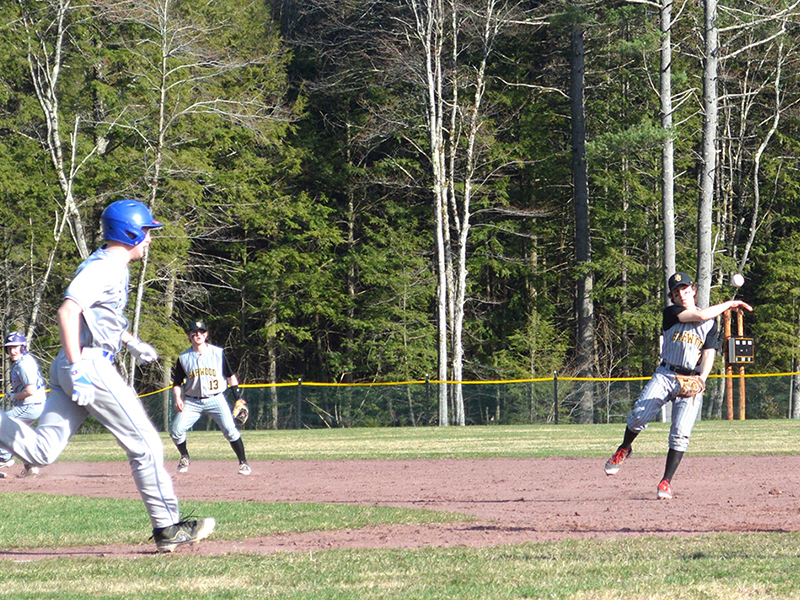 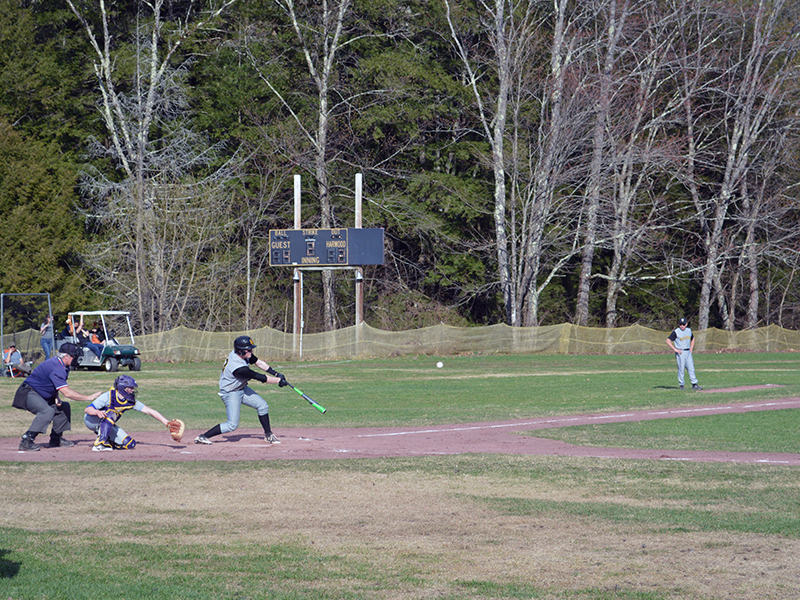 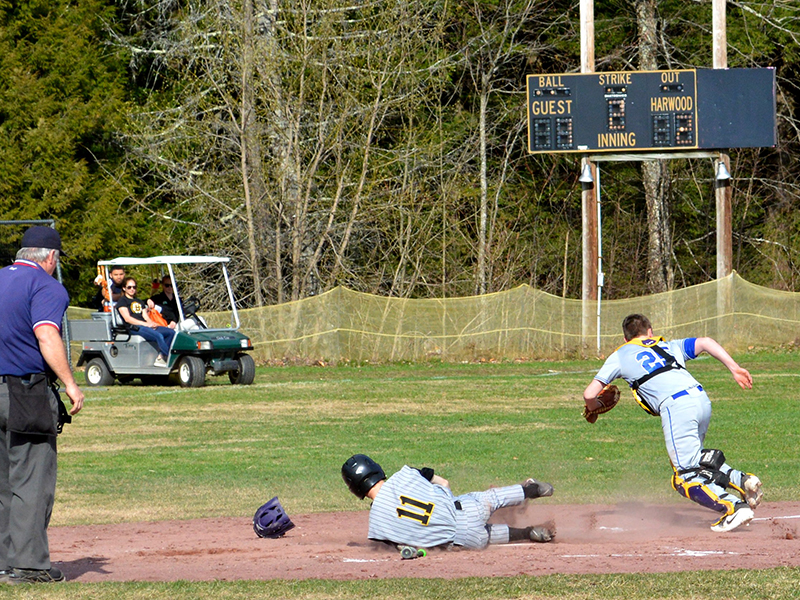 Sliding into home...
Previous Next

On a perfect day for baseball, sun shining bright, the Union 32 Raiders hosted the Harwood Highlanders on Harwood’s home field as the Raiders’ field was not yet playable.

During infield warm-ups, the Highlanders looked like a well-oiled machine, tagging bases and beaming laser throws to turn double plays. With the Highlanders up to bat at the top of the first, they were able to get one run across the plate to start the game. Caleb Kingsbury hit a third base line ball that would get him to first and with a U-32 overthrow, was able to advance to second. Kingsbury was able to make it around the bases before the final out and get Harwood one up on the board.

U-32 quickly responded at bat with a leadoff double. With two outs against them, including a popup to first baseman Liam Guyette and a strikeout from No. 8, U-32 was able to get two runners across the plate to gain the 2-1 lead before No. 8 would strike out the last batter.

TOP OF THE SECOND

Harwood would get their bats behind them in the second inning, scoring six runs against the Raiders. Nate Pierce had a single, Guyette had a single, Kingsbury hit a double, Bobby Kelly with a hit to land first base, a U-32 overthrow would allow him to advance to second. Chase Reagan would get a double, getting two Highlanders home. Adyn Oshkello landed a double on the third base line. At this point U-32 would make a pitching change.

U-32 would not earn any runs in the second after a few walks. HU was able to get an out at first base, an out at third with a throw-down from Harwood catcher Chase Reagan from behind the plate to get the out, and an out in right field from Max Hill.

TOP OF THE THIRD

Harwood was unable to make magic happen in the third as they would have two strikeouts against them from the Raiders’ new pitcher and one pop-up out. U-32 up to bat had one strikeout and one single that allowed U-32 to get on base. One fly ball caught in the air was a second out, but a Harwood overthrow allowed the batter on base to advance and get across home plate. Another hit to shortstop and a throw to first that got past Guyette allowed another batter to advance home before the inning was over, the score now 7-4, Harwood leading.

TOP OF THE FOURTH

It would be another quick at bat for the Highlanders, one out at first base and two in the outfield. Harwood would not add to their lead. U-32 up to the plate would hit a slow roller on the third base line. The HU pitcher waited to see if it would roll foul; ultimately the ball would stay in fair territory allowing the batter to stay at first. A pop-up hit just behind the shortstop’s glove would allow another Raider to get on base, as the next at bat would be a U-32 double, getting one more across the plate. A hit and play at first would be the first out as the Raiders would get another run for the inning, the end of four, score 7-6, Harwood leading.

TOP OF THE FIFTH

Harwood would get two walks in the fifth after an infield out to lead off the inning. The walks would eventually lead to two more Highlanders across the plate before an out at first and a pop-up out.

U-32 in the bottom would get bases loaded. A hit to the HU first baseman would have Guyette throw home on the play with the umpire calling the Raider runner at home safe. The next play, a missed ball past the third baseman’s glove, would allow another run in. At the end of the inning, U-32 would tie the ball game 9-9.

In the sixth inning, Harwood would not score a run as U-32 would get one past them, taking the lead 10-9. In the seventh, Harwood would gain one to tie it back up as U-32 would not get a run earned. Tie ball game, 10-10, Harwood would not make it around the bases successfully at the last at bat, leaving it up to U-32 to make magic happen. U-32 scored the winning run in the bottom of the eighth on a single followed by two errors while stealing second, winning the game 11-10.

When asked what he took away from the game, head coach Mitch Casey, in his 22nd year, said walks and errors were the downfall. The team had 10 walks on the game.

“Four of the seven errors were throwing errors. I think a large part of our problem revolved around the fact over half our team was on vacation last week and with only one practice before yesterday's game they weren't game ready. Seven extra outs and 10 free passes doesn't win ball games even if you do score 10 runs,” said Casey.

In practice this week the Highlanders will be working on basics. Casey said the team with the best overall grasp of fundamentals is usually successful.