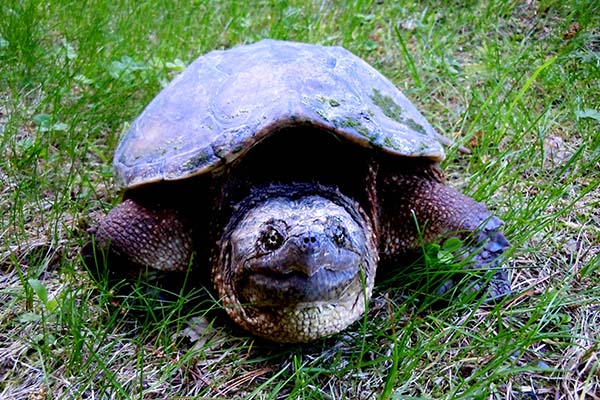 Drivers should be alert, especially near ponds and wetlands.

Vermont’s turtles on are on the move again this spring and the Vermont Fish & Wildlife Department is asking for the public’s help in keeping them safe. Female turtles are looking for places to deposit their eggs, sometimes choosing to lay them along the shoulders of roads, bringing them into the path of fast-moving vehicles.

“Turtles often go across roads as they search for a nest site,” said Steve Parren, biologist for the Vermont Fish & Wildlife Department. “They are slow-moving animals, so they have a tough time making it safely across the road. Turtles grow slowly and live a long time, so losing a mature breeding female is a huge loss to the turtle population.”

Turtle nesting activity peaks this time of year and drivers are urged to keep an eye out for turtles in the road – especially when driving near ponds and wetlands.

Fish & Wildlife and partners are working to collect data on road stretches that are hotspots for wildlife movement, including turtles. When those sections of road are upgraded or repaved the roads may be altered to protect the species involved. To that end, they are working closely with VTrans and with Jim Andrews from the Vermont Reptile and Amphibian Atlas, among other partners.

Even with these changes, Andrews notes, the turtles’ best defense is to have friendly humans avoid them or safely help them across the roads.

“When you spot a turtle in the road, you may be able to help it across. First be sure you’re in a safe spot to stop and get out of your car, as human safety comes first,” said Andrews. “If you’re going to move a turtle off the road, always move it in the direction it was traveling. They know where they’re going.”

According to Andrews, most turtles can simply be picked up and carried across the road. However, if the turtle has no colorful lines, spots or other markings, it is probably a snapping turtle, so people should not get too close to the animal to avoid being bitten. Snapping turtles’ necks are nearly as long as their shells. Instead of picking them up, people should push the turtle across the road with an object such as a shovel or broom.

Andrews is also asking paddlers, boaters and anglers to report turtle sightings throughout the state to the Vermont Reptile and Amphibian Atlas website at vtherpatlas.org. The reports help conservationists keep track of the status of these species in order to act if a species appears to be in decline.

“Sending in a report is quick and easy,” said Andrews. “Just snap a photo or two of the turtle and submit your observation via the website or email. We’re constantly impressed with Vermonters’ commitment to conservation and willingness to help us save turtles.”

Observations can be submitted to the Vermont Reptile and Amphibian Atlas online at vtherpatlas.org or This email address is being protected from spambots. You need JavaScript enabled to view it..