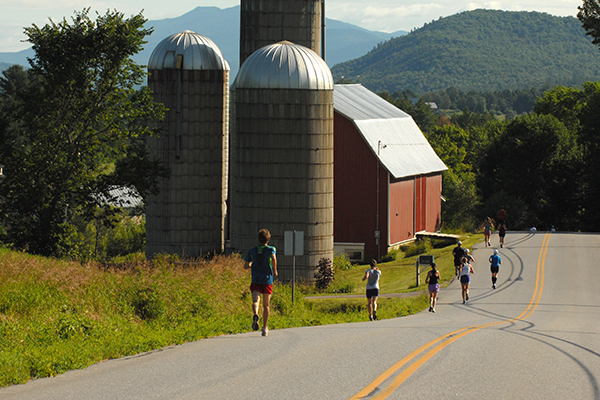 The Mad Marathon would not be possible without the support of over 300 volunteers. Community residents work throughout the weekend volunteering in innumerable ways including staffing aid stations along the 26.2-mile course. Below are details about some of those volunteers.

“As we approach our ninth Mad Marathon on July 7, I continue to be grateful to the Mad River Valley sponsors and volunteers who have supported this event. It would not be possible without such an outpouring of community warmth, care and giving,” race director Dori Ingalls said.

“Sugarbush has been involved since the beginning. The aid station used to be at Win Smith’s house and then we moved it near the Round Barn. We’ve had a variety of staff man the station from VPs to hourly employees and, of course, John Egan. This is a great way to help support a local event and help invite new people to experience this place. It’s such a special marathon because of its beauty and difficulty,” said Sugarbush spokesperson John Bleh.

The nonprofit organization, Hannah’s House, hosts two aid stations. President Cindy Carr said, “Hannah’s House was founded by family and friends in memory of Hannah Bedford with a purpose of providing local access to quality mental health care. When Dori offered the year-old organization the opportunity of having a fundraiser in her inaugural race, one of our board members convinced us that this was a great idea and moreover she would run with some friends. Our first team of six runners raised $4,000 and we were thrilled! Team Hannah has run in every race since, with teams varying from 22 to 102 participants who have raised over $340,000. Everything these wonderful athletes have raised has supported mental health services for the Mad River Valley, Waterbury and local schools.”

The Mad Dog Chapter of Trout Unlimited hosts aid stations at mile 13 and 22 on the marathon course.

“The Mad Dog Chapter of Trout Unlimited is happy to staff and support the Mad Marathon. The Mad Marathon and Mad Dog TU are passionate about supporting and highlighting the uniqueness of the Mad River Valley from its local trout streams to its lavish four-season beauty,” said Trout Unlimited chapter secretary Clark Amidon.

Amy Jamieson, representing the Waitsfield United Church of Christ aid station, said the Waitsfield UCC had been hooked on volunteering for the Mad Marathon since 2014, when they manned the water station at mile 19. A core group of volunteers has been doing it every year since.

Susan Klein, hosting at mile 15 and 20 with her quartet In Cahoots, said, “In Cahoots is a women’s singing quartet formed in 2005 as part of the Barre-Tones Women’s A Cappella Chorus based in central Vermont. We have been singing four-part harmony in the barbershop style for events, parties, shows and competitions. The group won Audience Favorite at the International Competition held in Orlando, Florida, in November.”

Expect brief road closures during the running of the Mad Marathon (except for local residents) on Sunday, July 7.