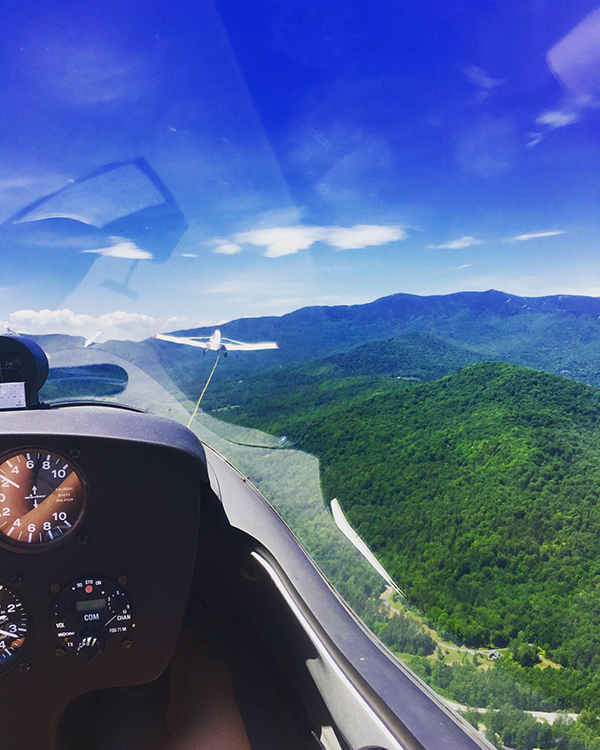 As Graham Ramsden, the pilot behind me, yelled that the small glider would release from the plane towing us along the Northfield Ridge, I thought for sure the Mad River Valley would be the last view I saw.

It wouldn’t have been the worst thing to see, but as I sit writing this the adrenaline from the glider ride is still pumping through my veins.

When one walks across the open field at the airport, the anticipation of flying builds up. A quick plane check done by pilots, checking fans, wings, buckles, brakes and wheels, is conducted. A small golf cart tows the glider plane out of its waiting position in order to be hooked up to a small plane, one I was informed used to be used in farming.

Ramsden, one of the commercial flight instructors at Sugarbush Soaring, reviews buckles and the flight route we are about to embark on. He asks if I have ever been soaring before. In response, I add I’ve been on big planes and hiked tall mountains, but when it comes to heights and stomach dropping rides, I am not a fan. 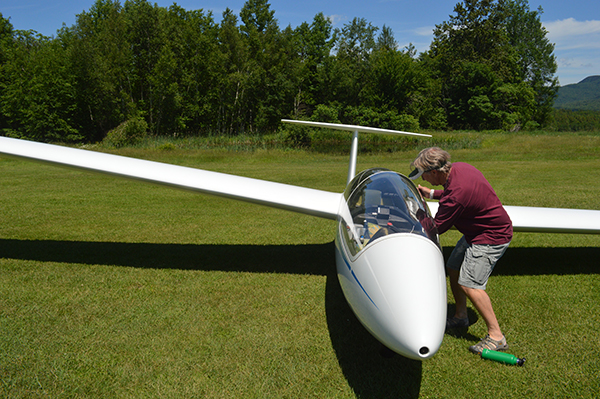 The glider door is lowered down and the plane in front of us starts to move, and I remind myself that this is a short journey and to not think about the many possibilities I’ve seen in movies involving planes.

We are lifted from the ground in a slow progression upward, heading toward Sugarbush to look over the range into the New York Adirondacks. The ride is smooth, with little bumps. I stare straight ahead at the gauges in front of me (already once explained to me – but I have already forgotten). Ramsden checks to see how I’m doing before indicating he will detach the rope from the plane in front of us. At this moment, I believe the plane will plummet straight down onto the mountain ledges and I will be a historic reporter.

Opening my eyes, I find we are gliding, almost at a standstill. To the left of me is Lake Champlain and New York; in front of me a jagged line of one of curvy mountainous spines of Vermont. After discussing air patterns and clouds, Ramsden indicated he will veer right slightly. Seeing no problem I agree. I find the plane tipping and my whole body going slack; this could be my first faint ever.

Several deep breaths later we are soaring over Sugarbush. I can see Blueberry Lake in the distance. To the left of me is Waitsfield, to the right is Warren. The ride is fun and freeing, and I can imagine why a bird would never want to land.

I ask Ramsden where the airport field is compared to our location. Ramsden replies, “I don’t know. I’m lost.” In the instant that I feel my stomach come back up to my throat, he laughs and says it is to my one o’clock direction.

We hit a slight air pocket that lets us dip, shaken. I immediately put my hands to the roof for safety – in all reality that did nothing, in case you are wondering. Ramsden asks if I like roller coasters, to which I reply, not in the slightest. Ramsden jokes that I could become a pilot.

Ramsden signals on the radio that we will be returning to the field. He tells me how he will swing by East Warren Road before looping back around to the strip. Surprisingly, I do not freak out as we hit the pavement with our wheels and glide onto the grass. I am once again on land and my time as a bird is over.

Sugarbush Soaring does roughly 1,700 rides a year. Their highest amount was a few years back at 2000. The rides are weather dependent and tend to be busier on the weekends. The gliders have steady traffic all season before a peak in the foliage season. Steve Platt, another commercial pilot in the office who pilots single engine airplanes, seaplanes and gliders, said that a first ride to some is a religious experience. Platt said in foliage season when riding toward Northfield ridge, the tree colors make the ridge look ablaze.