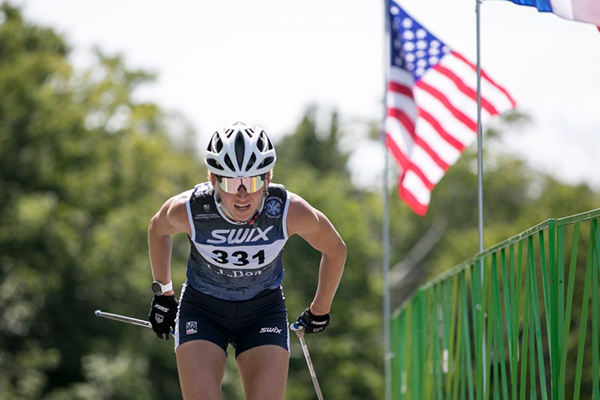 The App Gap Challenge is a rollerski skiathlon with a twist. Instead of beginning with a classic leg, the race starts with freestyle. At the Mad River Glen alpine area, approximately 5K from the long course start, athletes change over to classic gear for the push to the finish.

In the past, the race distance was set at 7.25K for men and 5K for women. According to Justin Beckwith, the New England Nordic Ski Association (NENSA) competition director, coaches requested a longer course for their athletes. Thus, 17 women, including all the racers above, raced the longer 7.25K course. Ogden’s time is the new women’s course record for the long course. Junior women skied the 5K distance.

Working with local municipalities, Beckwith was able to get the westbound lane of Vermont Route 17 closed for the race. The early kilometers have a fairly relaxed profile. As the skiers approached Mad River Glen, the road pitches up, with sections at 13 and 15 percent grade.

Sophie Caldwell’s App Gap experience provided an opportunity to synch her top gear efforts with the terrain best suiting her. The Vermont-based skier was the fourth-ranked sprinter on last season’s World Cup.

“Uphill races are generally not my strength,” Caldwell emailed. “My goal was to hang on for as long as possible and to try to conserve energy. I quickly realized that my strengths relative to the pack were the more gradual sections where I could double pole kick or V2, so I tried to save a little energy there and then match KO and Caitlin on the uphills. Caitlin led the entire skate section and then KO put in a surge on the classic that I tried to match and we took some turns leading there before she pulled away. It was a very hard effort and a nice test of fitness. I don’t read into rollerski races too much in the summer, but I was psyched with how today went!”

Years ago, the App Gap was the low-key culmination of a summer camp at Green Mountain Valley School (GMVS) when Beckwith coached there. After a hiatus when the App Gap race lapsed, it returned when Beckwith became New England Nordic Ski Association’s (NENSA) competition director.

In 2017, the first year that NENSA organized the App Gap event, there were 57 finishers. That total bumped to 119 last year. This year’s App Gap featured 167 finishers.