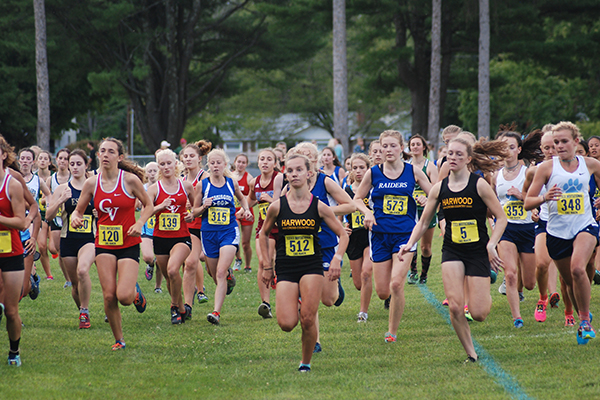 “Our seven-member varsity team is comprised of three sophomores and two freshmen. The freshmen, Charlie Flint and Jill Rundle, were running in their very first XC race. My expectations were not high. I was so surprised that we finished very close to Division I powerhouses Essex and Burlington. It will be a fun to watch them evolve over the season,” said Kerrigan.

Sophomore Ava Thurston led Harwood girls. Thurston’s second-place finish was as impressive as it was dramatic. Although the timing camera showed Alice Larson, a CVU runner, ahead of Thurston at the tape, Thurston’s timing chip was recorded with a faster time because her foot hit the finish pad before Larson.

With no seniors, three juniors and four sophomores in the top seven, Harwood boys also show promise, Kerrigan said. The young boys’ team finished 12th out of the 22 schools represented and fifth for Division II.

“These guys are going to continue to improve. They are real fighters and are learning from every race,” said Kerrigan. Carlton Cummiskey (18) beat his 2018 time from Essex by over one minute. He was followed by Luke Groom (62), Ebbe Lillis (68), Vincent Spina (70), Zennor DiMario (85), Jack Lamphere (93) and Silas Yonkman (96).

“Watch for that gap between No. 1 and No. 5 to close. Our sophomores are closing the gap on the juniors,” said Kerrigan. River Collins was the top JV runner placing 76th in the 150-plus field of runners.

The Harwood XC team travels to North Beach in Burlington on Saturday, September 7, for the Burlington Invitational. There will be teams from Quebec and Rhode Island as well as the usual Division I powerhouses like CVU and Essex. “It will be fun to run with the big dogs,” Kerrigan said.