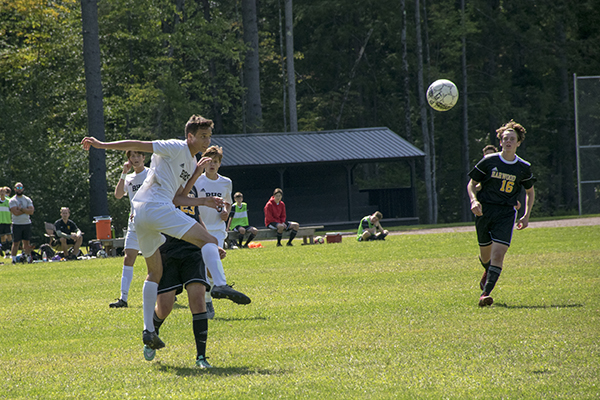 On Saturday, September 7, the varsity boys’ soccer team hosted Burlington High School for a game that would have Burlington ride home with a victory.

“We devoted time to defensive shape leading up to the game. Burlington is often in the final four of DI and they have had a good run of creative goal scorers on their team. I have lots of guys playing together for the first time, so familiarity and trust go a long way,” said head coach Joe Yalicki.

Owen Harris made one save for Burlington while the Highlanders’ Ollie Hammond made eight saves for Harwood.

“We made some mistakes but made huge improvements as a group as the game went on. I was really proud of the effort and attitude before, during and after the game. We took away lots of positives from the loss,” said Yalicki.

Harwood came from a loss against Burlington to win against Milton High School at home on Tuesday, September 10. Harwood’s Hayden Adams scored unassisted with 36 minutes left in the first half.

“Awareness and decision making have been the focal points for this week. Each team plays a different style, but we can only control what we do. I often challenge my guys to make the other team react to us,” said Yalicki.

Harwood golf traveled to Stowe Country Club on Monday, September 9, to tee off against Stowe, U-32 and GMVS.

Stowe was the only other full team present as U-32 had two golfers and GMVS had one. Stowe was able to take the win on the course for the day.

“I thought the kids struggled on a really nice but tough course. I will talk with each to find out where they struggled and go from there,” said head coach Brian McCarthy.

Harwood varsity field hockey hosted Stowe High School on Friday, September 6, in what would be a close game till the late second half.

Harwood and Stowe play north and south hockey, breaking the ball up and down the field repeatedly on both ends, to have the other team reclaim it and work the other way. Both teams easily switched the field, moving the ball across the field in order to switch the movement and momentum of play.

Stowe was able to score in the late second half to capture the win over the Highlanders.

“The girls played a great game. Communication and movement of the ball was very good. I’m very proud of all the hard work they have been doing – it’s going to be a very fun season,” said assistant head coach Chelsea Delphia.

On Friday, September 6, Harwood girls’ soccer hosted Spaulding High School in what would be a runaway game.

Harwood let Spaulding pack the first punch, when Spaulding scored in the opening minutes. Harwood, quick on the rebound, answered with five back-to-back goals in the first half.

“We gave up the first goal three minutes in and then came back to answer with five goals in the first half. Showed team strength to not get down,” said head coach Mike Vasseur. Vasseur said his team will continue to work on movement and team defense. “I feel we are improving each time we take the field and are getting stronger,” he said.