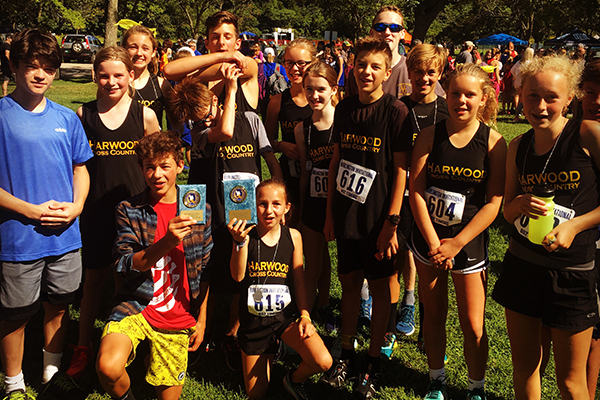 In their first meet of the season, both girls’ and boys’ Harwood Middle School cross-country teams earned podium spots at the Burlington Invitational race on Saturday, September 7. Girls were the runners up and the boys brought home a third-place plaque.

“With barely seven practices under their belts and two-thirds of our runners being seventh-graders and having never raced in a meet before, our gritty team took the Burlington course like they owned it,” said coach Lou Bevacqui. “They showed amazing resilience, racing like seasoned veterans in one of our largest meets where they race against all divisions.”

Julia Thurston (second) had a time of 13:03 and McKenna Paxman (eighth) led the charge for the middle school girls’ second-place finish. Thurston and Paxman were followed by Hazel Lillis (14th), Heidi Haraldsen (15th), and Celia Wing (17th), who were within 17 seconds of each other. The top seven were rounded out by Susannah Smith (56th) and Rowan Turkle (57th).