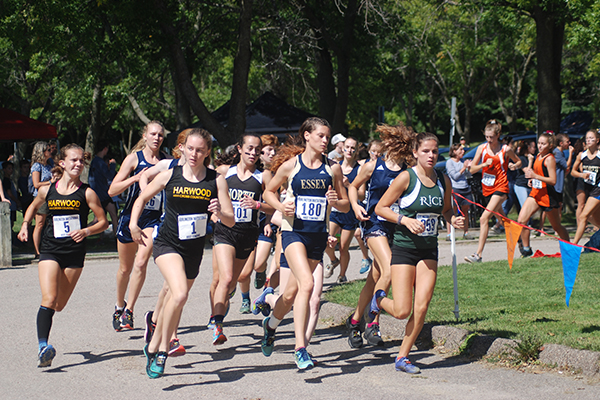 Harwood Union boys’ and girls’ cross-country teams traveled to North Beach in Burlington on Saturday for the Burlington High School Invitational. At the Burlington Invitational, the top finishers receive dog tags. These awards are symbolic of the field of teams running in the invitational this year. Participating teams were the larger Division I schools in Vermont such as Burlington and Essex. Also participating were teams from large schools from Montreal and Rhode Island.

The Harwood teams, Kerrigan’s Army, comprised of young runners held their own against the upperclassmen from the larger Division I schools. Harwood boys finished fifth in the 12-team field. HU girls were a bit faster, finishing third among 10 larger schools.

Paving the way for Harwood was Ava Thurston. Thurston placed first among all runners. Her time of 18:50 was the second fastest ever by a Harwood XC runner. She was followed by Caelyn McDonough (11). Assistant coach Ryan Kerrigan called McDonough’s finish “a break-out race” for the sophomore. Her co-captain, Julianne Young, followed Caelyn.

Although suffering from injuries, Young managed to crack the top 12. Britta Zetterstrom finished an impressive 15th. She was followed by Harwood’s freshman duo of Charlie Flint (27) and Jill Rundle (29). Senior co-captain Alex Pendo followed the freshmen. Pendo improved her time on the BHS course by over 4 minutes.

“It just goes to show what running over the summer can do,” said coach Kerrigan. Host Burlington was first for the girls’ teams; Essex was second. Harwood girls were close behind the Division I powerhouses in third. Harwood girls were impressive in the JV race as well placing as follows: Anlu Thamm (4), Sarah Kate Smith (10), Laura Martinez (14), Hadley Keilich (20) and Masie Frank (22).

The Harwood boys’ team is even younger than the girls. Three juniors and four sophomores make up the team. Harwood boys finished higher than several teams that finished ahead of them at the Essex Invitational on August 31. Junior co-captain Carlton Cummiskey led the HU runners with a 10th-place finish. He was followed by rapidly improving Luke Groom (14), Ebbe Lillis (35), Vinny Spina (39), Jack Lamphere (49), Zennor DiMario (50) and Silas Yonkman (56). River Collins (32) and a much improved Jonah Busker (54) were the top JV runners for Harwood in the 100-plus field of runners.

Next up for Harwood XC is the Randolph Invitational held on the college course at Vermont Technical College on Saturday, September 14.