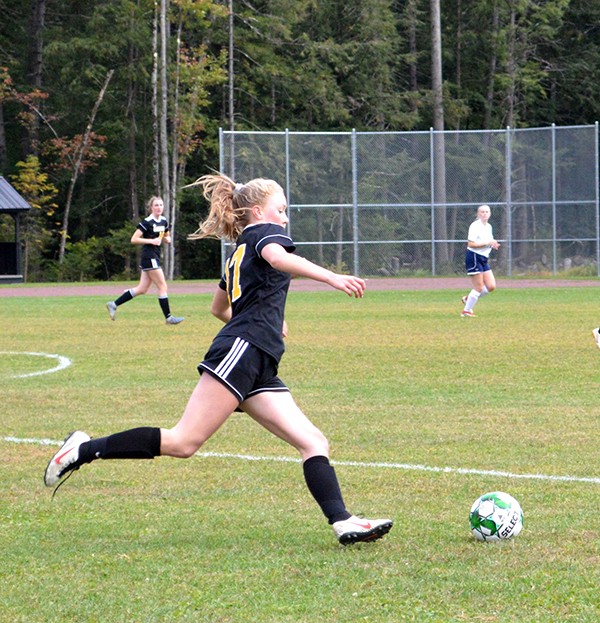 Harwood’s varsity field hockey team traveled to Spaulding on Thursday, September 12, for a game that would have the crimson tide out the Highlanders 1-0.

Head coach Katie Alexander said that her team played well throughout the game’s entirety. “We played hard and maintained possession throughout a lot of the game, but were unable to score.”

Harwood had seven offensive corners that could have helped the Highlanders sink one in the net, but Spaulding was able to hold the line. Harwood defended five corners of their own. Harwood goaltender Kaylee Cameron had three saves.

Harwood was on the road again for a late game under the lights against Missisquoi on September 16.

“The girls played really well and did a great job playing aggressively and communicating with each other on the field,” said Alexander.

Boys’ and girls’ golf teams teed off at the Country Club of Vermont on September 11 against Stowe and Lake Region.

Medalists for the day’s match were Stowe’s Chance Newhouse with a score of 36 and Lake Region’s Tia Martinez for the girls with 44.

Total team scores on the day were Lake Region with 102 and Harwood and Stowe with 121 each.

Lake Region’s Tia Martinez had 44 and Mackenzie Smith scored 58. Harwood’s Maddy Cheney finished with 60 and Emma Kellett with 61. Stowe had Lexi James with 57 and Grace Dolan with 64.

The boys’ soccer team traveled Friday, September 13, for a game against the combined team of Northfield/Williamstown (NW).

After a scoreless first half and with time running out late in the second half, Harwood was able to gain ball possession for the team’s first big break with under 10 minutes to go.

“We controlled the game possession-wise for most of the game. We broke up many of the long passes NW tried to play and kept organized in the back,” said head coach Joe Yalicki.

When asked what he will have his team work on in practice this week, Yalicki said they’ll be working on passes. “I want the team to continue to raise awareness off the ball and improve composure with passes in the defensive half.”

Harwood volleyball traveled to play Enosburg on September 11 in what would be a 3-0 match win.

Harwood won the first set 25-7, the next 25-18, and the last 25-9. The head coach for the team, Ali Lake, said that her team adapted well for the win after a last-minute position switch. “I threw a completely new lineup at the girls and they took it in stride. They are so willing to try new things, as long as it benefits the team as a whole, even if it doesn't always benefit each individual player,” said Lake.

Coming off a win, Harwood traveled to play CVU on September 13, where Harwood would lose three close sets.

“This was our second game utilizing our new lineup and I truly believe that even though we lost the girls were able to see the beginnings of something awesome. These girls have so much potential. They are absolute sponges. They can learn and adapt so quickly. I can't wait to see how much they will grow,” said Lake.

The team is preparing for the next match against Rice on Wednesday, September 18, as The Valley Reporter goes to press.

“We will be focusing on working as one team rather than six individual players. There has been an expected amount of miscommunications and mental errors due to the shock of a new lineup. However, I am positive that this will not be an issue for us in the coming days. Things are already beginning to click in practice and I am starting to see the team work as a unit more and more every day,” said Lake.

Girls’ soccer hosted Randolph on September 17 in a runaway game that had the Highlanders leading well into the second half.

Ashley Proteau and Emma Raveli scored two goals for Harwood and Tanum Nelson, Kayla Yalicki and Louisa Thomsen each netted one. Two goals were scored on error from Randolph. The girls will play U-32 on the road on Saturday, September 21.

Head coach Mike Vasseur said the team will be working on confidence with the ball and having fun. 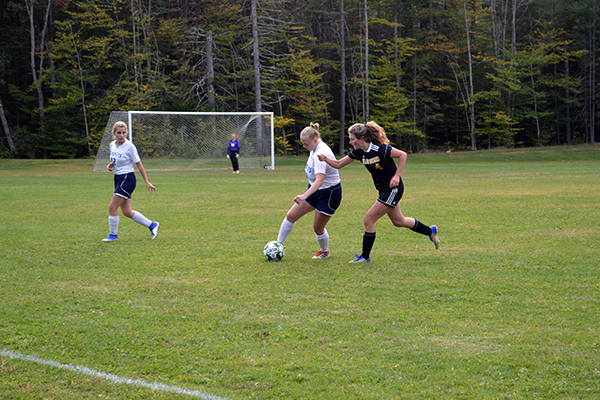