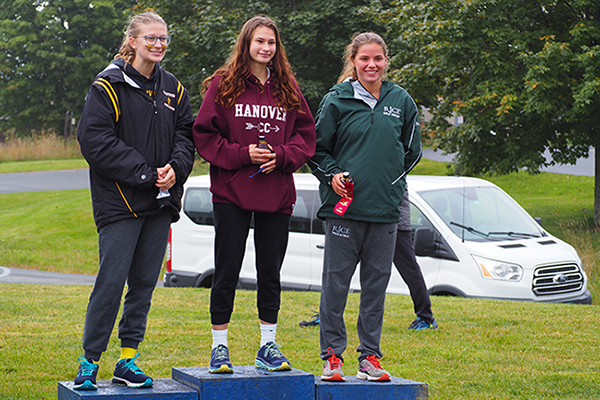 Although disadvantaged by illness and injury, the Harwood runners continue to make their mark on Division II competition. Twenty runners set personal records (PRs) or their best times ever.

Coach John Kerrigan sited two reasons for the strong showing by his runners.

“The course at VTC (although a college cross-country course) is very flat and fast. Running on the hills of Duxbury all week made running on this track effortless. They call us the Highlanders for good reason. Also, our team is very young. They are improving in leaps and bounds. It is awesome to share in their excitement for personal achievement,” he said.

“Eric Picconi (Hanover cross-country coach) and I have had a close relationship since the wrong-way driver student fatality that took the lives of our students. One of our runners (Morgan Baughman) was a close friend with several of the boys that died in the tragedy. Morgan had just recently transferred to Hanover before the accident. Eric and the Hanover boys came over to Harwood that year to help with our invitational. It was a true act of empathy for Morgan and showed kindness to our team during a rough spell. Hanover and Harwood have always been friendly competitors, but this act by the Hanover runners took the friendship to a new level. With that said, I hope our girls can close the gap on the Hanover girls next Saturday in Manchester,” Kerrigan said.

“She has been overshadowed by Ava and Julianne the past two years. It was wonderful to see her on the podium,” Kerrigan said.

“It was good to see Willa regaining her speed after a year of study in New York City,” the coached added.

Harwood boys (130 points) finished in fifth place in the 14-team field. Harwood boys were only six points off the podium. Third-place Colchester finished with 124 points. Hanover won the boys’ race. BFA of St. Albans was second.

“Our young boys’ team is improving tremendously. To finish only six points off the podium in a large invitational such as this is encouraging,” Kerrigan pointed out.