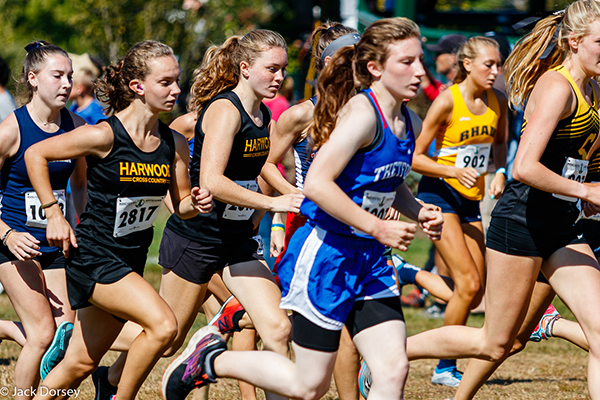 Ava Thurston has taken her running to a new level, according to her cross-country coach John Kerrigan. Thurston won the New England Small School Championship on September 21 in Manchester.

“We all knew she was one of the top runners in Vermont, but she has quickly become one of the best runners in all of New England,” Kerrigan said. At the 2-mile mark of the 3.1-mile race, Thurston broke away from a pack of elite runners to win the New England Small School Championship.

She left the shadows of Chloe Trudel of Souhegan and Sophia Rebenciuc of Merrimack Valley and cruised to an easy victory with a time of 19:09. Thurston led a Harwood girls’ team that is slowly moving up the ranks of Vermont teams. Harwood girls finished fifth in the 40-plus field. South Kingston, Rhode Island, was first followed by Merrimack Valley, Souhehgan and Hopkinton, MA. “We are slowly closing the gap between our first and fifth girl,” said Kerrigan.

“Britta Zetterstrom (24) had a strong race for us,” said Kerrigan. Zetterstrom was followed by Caelyn McDonough (43), Julianne Young (47), Charlie Flint (63), Jill Rundle (73) and Alex Pendo (153). “Julianne is making a nice recovery from her injuries and Charlie had an awesome race.” Our top JV runner, Anlu Thamm, also had a breakout race finishing 10th in the 300-plus runner field! It was a good showing for our girls,” said the coach.

The boys’ Small School Championship was won by Oyster River, New Hampshire. Harwood boys had a good showing by finishing 21st in the 45-plus team field. “To finish in the middle of this elite group of runners with no seniors and only two juniors was very impressive. Some of our guys struggled with the heat today, but they still hung tough as a team,” said Kerrigan.

Harwood XC competes next at the U-32 Invitational on Saturday, September 28.