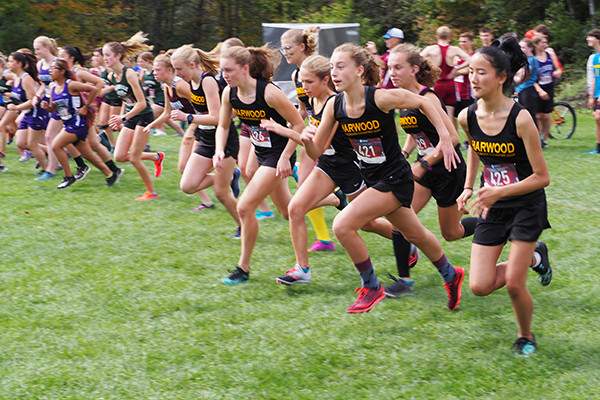 According to the latest polls from the Vermont Cross-Country Coaches Association Harwood girls are ranked first among Division II schools and fourth overall when all divisions are considered.

Looks like this is about to change. Harwood girls were solidly beaten by a strong U-32 team running on their own course at the U-32 Invitational on Saturday, September 28. Harwood placed three girls in the top 10. Ava Thurston continued her winning streak beating her closest competitor, May Lamb of U-32, by 59 seconds. Britta Zetterstrom finished fifth, less than 2 seconds behind U-32’s second runner, Lana Page. Caelyn McDonough finished 10th just behind two U-32 runners. Although Harwood’s trio of Jill Rundle (22), Charlie Flint (23) and Julianne Young (24) finished solidly together, it was not enough to beat the Raiders.

“We have two freshman runners in our top five. They are improving rapidly and should stir things up a bit with another month of racing experience. Julianne is slowly improving from her injuries. Hopefully by state meet we can be much closer. But we are going to need some help from other teams. Although Ava won by almost a minute, the top U-32 girl placed second. We gained a minute in team time comparison but only one place in the final score. Hopefully individuals from other teams will fill that gap,” said coach John Kerrigan.

“We had our top five runners in before every team except the winning team (U-32),” the coach recalled.

Harwood will be competing this Saturday, October 5, at the Maine Festival of Champions. They will be competing against 85 teams from Maine, Nova Scotia, Prince Edward Island, Newfoundland and Rhode Island. Over 2,000 runners are expected to race the course in Belfast, Maine.